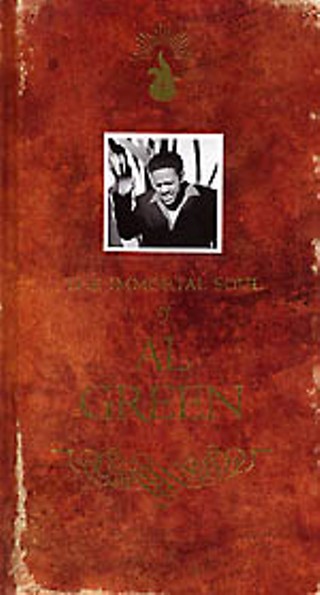 Thanks to last year's blessed reunification of Al Green and his Midland, Texas, rendezvous, producer/arranger Willie Mitchell, the soul deity's I Can't Stop came to rest atop 2003 Top 10 lists like Noah's ark on Mount Ararat. Delayed in the discovery was The Immortal Soul of Al Green, a 4-CD alternative to 1997's Al Green Anthology, another 4-CD baptism of soul brother No. 1's Hi Records heyday, 1968-78. In correcting some of Anthology's lapses – short run-times on the first two discs; a nonchronological approach – Immortal's groove is longer and stronger, but it also peaks too soon before switching to autopilot. Discs one and two, "Sex" and "Love," are the heady rush of perfect chemistry. Mitchell molds the buttery Sam Cooke crooner of "Back Up Train" by strapping him on the Memphis backbeat of the Hodges brothers – Mabon (guitar), Leroy (bass), Charles (piano) – and either Al Jackson Jr. or Willie "Bulldog" Grimes on drums. The urban bump and grind of Green originals "Get Back, Baby" and "I'm a Ram," combined with Motown knock-outs ("I Can't Get Next to You"), standards ("Summertime"), and covers of the day ("Light My Fire," "How Can You Mend a Broken Heart," "I Want to Hold Your Hand") are "Sex" incarnate. Willie Nelson's "Funny How Time Slips Away," the still whispers of "Simply Beautiful," and 15 interminable minutes of "Beware" test "Love." Discs three and four, "Salvation" and "Soul," find the well of hits drying up after "Take Me to the River" and "Sha-La-La (Make Me Happy)," though the easy street sass of "The City," funk stew of "Love Ritual," and meditative "Eli's Game" are thirst quenchers. The gentle undulation of "I Tried to Tell Myself" sets the stage for a thousand late-Seventies, early-Eighties AM radio R&B acts. Even somewhat generic Green (disc four) is powerful medicine. What's missing are B-sides, live material, and lost testaments, all of which appear briefly on Anthology, whose sequencing and hymn book packaging imbue the earlier collection with more sheen. Sorely needed is historic, Motown-like vault scouring, resulting in something like the Temptations' superlative Emperor's of Soul box. Cursory liner notes don't preserve Immortal's mortality. Prophetically, with Green and Mitchell due down from the mount in 2005 with another armload of fresh tablature, this train isn't about to back up.