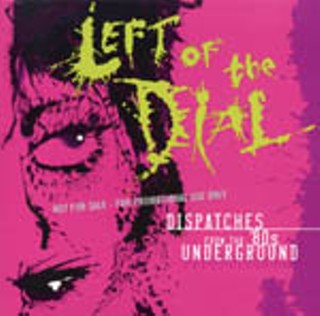 This 4-CD box is fuchsia, but the music within is an invaluable document of the not-so-distant past. Following a decade and a half of social upheaval beginning in the mid-Sixties, the U.S. and UK spawned a movement of bands that introduced elements of art, theatre, and especially dance to a genre suffocated by steamrolling guitars and stampeding hormones. Not to worry: Eighty-two songs deep, Left of the Dial has plenty of the latter. The Cure, Red Hot Chili Peppers, and R.E.M. take baby steps toward iconhood. Depeche Mode, New Order, Sonic Youth, Echo & the Bunnymen, the Pretenders, Jane's Addiction, the Smiths, Ministry, and the Pixies are in their prime. Primo punk from Black Flag, Hüsker Dü, Minor Threat, the Descendents, Dead Kennedys, Bad Brains, and the Dead Milkmen's adorable "Punk Rock Girl." Probing the limits of reason and propriety are the Meat Puppets, the Cramps, They Might Be Giants, Public Image Ltd., Camper Van Beethoven, the Raincoats, the Sugarcubes, and Texas' own Butthole Surfers. (No Scratch Acid or Big Boys, though ... sniff.) Herein lie the seeds of goth with Bauhaus, Siouxsie & the Banshees, and the Sisters of Mercy; grunge's roots in Killing Joke, Faith No More, and Dinosaur Jr; and lo-fi building blocks Beat Happening and the Feelies. Gang of Four's Studio 54 firebomb "To Hell With Poverty" is timelier than ever, and nothing before or since has grooved quite like the Happy Mondays' elastic "24 Hour Party People." These bands could be your life: Replacements, X, Mission of Burma, the Jesus & Mary Chain, Minutemen, Violent Femmes, XTC. As loaded with 120 Minutes memories as it is, the set doesn't skimp on anomalies and also-rans, the ground troops in this grassroots uprising: Aztec Camera, the Smithereens, Throbbing Gristle, the dB's. Do the Go-Betweens ring a bell? Lyres? Prefab Sprout? Including the Hoodoo Gurus, the Chameleons UK, and Magazine, or neighbors Dream Syndicate, Concrete Blonde, and the Rain Parade, speaks to the curators' L.A. record-store past. If anything, Left of the Dial's chief flaw is being too scattershot, nestling Kate Bush next to Gun Club and OMD's "Enola Gay" alongside the English Beat's "Mirror in the Bathroom." But that's how the gradual takeover of pop by these bands and their progeny happened: haphazardly. It may have been a bloodless revolution, but the aftershocks are still rocking our world.