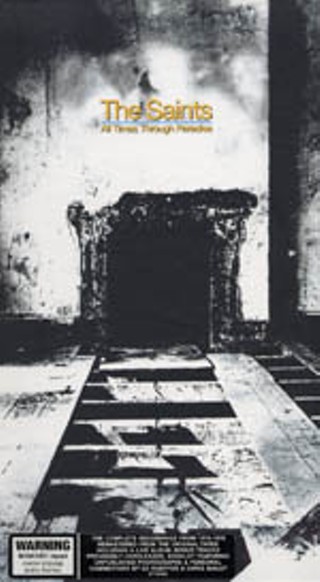 All Times Through Paradise (EMI Australia)

"The Saints are, with the Ramones, the absolute ground zero of Seventies punk," notes rock & roll scholar David Fricke. That both acts' Stooges-like bulwark of pound and fission debuted live in the UK summer of 1976 helped touch off the punk revolution. Back home in Brisbane, Australia, best known for the Bee Gees, the Saints' yowling first single "(I'm) Stranded" was initially turned down by EMI's branch office in favor of "the more sophisticated" sounds of the Little River Band. The Sex Pistols' major label sponsor, along with critical history (as opposed to commercial annals), later righted such wrongs, but the fact that the 4-CD All Times Through Paradise is available only as an import keeps the Saints grounded mostly as a transcontinental footnote. Drawing its Edenesque boundaries around the group's inaugural incarnation, 1976-1978 – pub wiseacre Chris Bailey, axe fiend Ed Kuepper, drum flail Ivor Hay – Paradise is 18 months in the eye of a universally reviled newborn hurricane. Discs one and four are the firewall. Like The Ramones, the Saints' 1977 Sire first-born (I'm) Stranded softens the edges of Kuepper's sandstorm guitar so Bailey's Strummer-like slur sits atop the mix. Underneath, Kinksian vox feed the phosphorous burn of "No Time," and even the pummeling duo that melts down Stranded, "Demolition Girl" and "Nights in Venice." "Erotic Neurotic," a double-time rewrite of John and Paul's "I Wanna Be Your Man," plus the "Paint It Black" pinpricks of "This Perfect Day" echo the past darkly, while "Messin' With the Kid" presages the Kinks' "Misfits." "Story of Love" waxes the softer side of the Who's maximum R&B, in full gale force on the bonus One Two Three Four EP and the disc-closing "River Deep Mountain High." After the gasoline fire Stranded, follower Eternally Yours is infinitely more mortal, horns added ("Know Your Product"), freight train tendencies ("Run Down") reduced, and Sixties pop sensibilities more polished ("A Minor Aversion"). Disc three, '78's Prehistoric Sounds, is moodier, bluesier, akin to LP standout "All Times Through Paradise" and its revved-up counterpart "Brisbane (Security City)," buttressed here by 17 storming minutes of a 1977 Sydney bill on which the Saints and Radio Birdman camps squared off. Stand-off bags disc four, a professional recording of the '77 Saints at London's Hope and Anchor. Paradise.