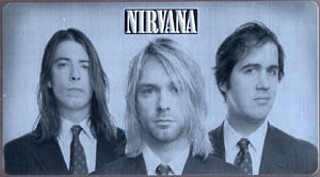 With the Lights Out (DGC)

Squalling in at more than 31/2 hours of mind-melting audio, 68 of 81 tracks previously unreleased (commercially), and another 75 minutes of the ultimate reality DVD, With the Lights Out reveals only one tiny little bulb in its long brilliant string on the blink – 56 seconds of Kurt Cobain at 1992's Reading Festival intro-ing "Smells Like Teen Spirit" with a snippet of Boston's "More Than a Feeling." It's the same riff. That this missing link is excavated on Outcesticide V, Disintegration, part of a widely held series of CD bootlegs whose sutured underbelly of Nirvana undoubtedly cemented the template for this season's most anticipated box set (and recovered litigant), rather than on With the Lights Out is hardly a revelation. Not everyone would appreciate the evolutionary tie between punk revolution two and Seventies petrifaction. Nevertheless, With the Lights Out is decidedly not Targeting the Wal-Martyr from "In Bloom," the one who "likes all our pretty songs, and he likes to sing along – and he likes to shoot his gun – but he don't know what it means." For him, there's last season's no frills, one-disc hitter, Nirvana. For the fan-atic, WTLO's scrapbooklike discography unveils both a gold mine of (still) unreleased material and the Seattle trio's penchant for dashing off B-sides, tributes, and noise at the smash of a guitar. The set's audio triumvirate corresponds to Nirvana's three full-length studio recordings, 1989's Bleach, '91's Nevermind, and '93's In Utero, only in the alternative, gather-all paradigm of Outcesticide. Like Cobain's autobiography, Journals, which illustrates the liner notes, WTLO's quality mirrors its author's meteoric creative arc. Disc one's debut live recordings, demos, and studio sessions scour Bleach-outs "If You Must" and "Pen Cap Chew," which burn like In Utero. Live hallucinations like "Raunchola/ Moby Dick" offset solo acoustic Cobainers "Polly" and "About a Girl," while a trio of Leadbelly parolees are chased by the "Even in His Youth"-like "Token Eastern Song" ("older than your God") sliding into a demo of "Even in His Youth." Disc two opens with more acoustic roughs, including "Opinion," a Cobain snark duking it out with heavyweight VU cover "Here She Comes Now," a furious, rough mix of "Breed," and a scathing, nine-minute BBC run-through of "Endless, Nameless." The third disc starts the spiral downward, belied by 10 bludgeoning, Zeppelinesque minutes of "Scentless Apprentice," bombast also found on a demo of "Milk It." Less compelling are 14 combined minutes of B-side "Gallons of Rubbing Alcohol Flow Through the Strip" and "The Other Improv." In Utero demos are mostly listless, doubtlessly crippled by Cobain's heroin use. A Lisbon rehearsal for "Jesus Doesn't Want Me for a Sunbeam" is a shrug. Three acoustic home demos, the riddling "Do Re Mi," an eerie, skeletal version of posthumous Nirvana hit "You Know You're Right," and "All Apologies" spook down the audio portion of WTLO. Haunting is one way to term the mostly crude but effective digital visuals of disc four, highlighted surreal by 30 minutes of a 1988 rehearsal in bassist Krist Novoselic's mother's house. Blue Cheer's debut LP, sitting on the floor, says it all: With the Lights Out, classic R-O-C-K.