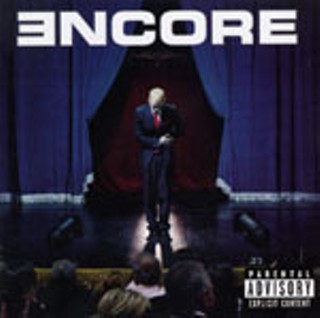 Somebody should tell Eminem it's OK for his albums to be less than 80 minutes long. Then maybe his creative needle wouldn't hover so precariously close to empty. Case in point: where 2002 smash "Without Me" was bitingly clever, Encore's carbon copy "Just Lose It" is puerile and embarrassing, even though he quotes Beavis and Butt-head and does a wicked Pee-wee Herman. The best thing going for "Puke" is the clip of someone (the listener?) vomiting, and that's not even as good as the one on the Butthole Surfers' Independent Worm Saloon. "Big Weenie" isn't even worth the effort. Oh, and I almost forgot – he still hates his parents and ex-wife as much as he loves his daughter. Yawn. "Rain Man," when not openly mocking the handicapped, suggests he's still coming to grips with his sexuality. Double yawn. And can't he find better targets than Michael Jackson, Jessica Simpson, and Triumph the Insult freaking Comic Dog? Yet even after all that, there's a strong album lurking in here somewhere. It surfaces on old-school tribute "Yellow Brick Road," potent anti-Bush rant "Mosh," and demented Bollywood fever dream "Ass Like That," which manages to out-deprave R. Kelly. Throw in dependably solid production from Dr. Dre and strong supporting turns from 50 Cent, Nate Dogg, Obie Trice, and D-12, and Encore will likely be as big a commercial juggernaut as its predecessors. But so what? The real Slim Shady is officially in real danger of becoming clichéd. His free pass expires here.