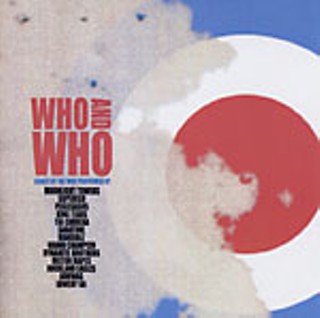 Thirty years of the Who's maximum R&B are compressed tighter than Pete's Townsend's first (mini) rock opera "A Quick One While He's Away" on Who and Who, 13 bull's-eyes and near misses from modern Austin mods. Saratone's bashing of "A Quick One" windmills, the Dynamite Brothers' live "Young Man Blues" thrashes its kit, and the Rockland Eagles' "Join Together" roundhouses like a backstage brawl. In fact, it's not until the fifth track, Tia Carrera's thuggish strut through "Baba O'Riley," that Who on Who smashes the mirror of near-perfect impersonation. The slithering pulse of Moonlight Tower's "Armenia in the Sky," from the Who's inspired Sell Out LP, opens into Superego nailing "The Kids Are Alright" with an endearing sincerity. Batting third, Peglegasus pulls out all the "Sparks" before King Tears executes a spot-on Townsend vocal on "A Legal Matter" in the clean-up spot. Grand Champeen rains more than a little sulfur on John Entwhistle's immortal show opener "Heaven and Hell," and bless them for the memorial. One after another, River City garage doors splinter in an explosion of original punk piss, the sheer passion with which it's all played (Jawwas' "Pinball Wizard") mooting the sometimes too faithful precision of the proceedings. Mandible ("Cousin Kevin"), Milton Mapes ("Love Ain't for Keeping"), and one of the single most inspired Who covers anywhere, Lowery 66's seven-minute Lithium bop through "Eminence Front," rattle unconventionally enough to jolt Who and Who out of rock & roll karaoke mode. My generation, your generation, nobody's fooling.