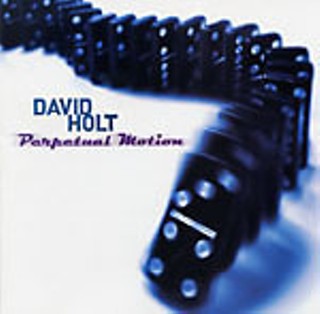 With a résumé like David Holt's, there's no need to wonder what took him so long to record his solo debut. He's been busy. For 25 years, the guitarist has shared stages with Jesse Taylor, Rosie Flores, Carlene Carter, Joe Ely, the Mavericks, Bill Carter, Jimmie Dale Gilmore, Butch Hancock, Billy Joe Shaver, the Sexton Brothers, the Supernatural Family Band, and the group most Austinites probably remember him with, Storyville. A primo axeman, few might guess that deep down Holt's also a fine vocalist and songwriter. With Perpetual Motion, Holt handily demonstrates he's the proverbial triple threat. With the assistance of Bill Carter and Carter's wife, Ruth Ellsworth, on most of the tracks, he's composed a set of tunes that is wide-ranging yet surprisingly cogent. Holt takes his blues, rock, and country influences and mixes them into a whole that accomplishes the delicate balance of guitar flash and solid songsmithing. Between the opening riff rocker, "Til the Wheels Fall Off," and the closing barroom weeper duet with Kacy Crowley, "One Seam at a Time," he sounds like a bunch of different artists, from Rodney Crowell and Nick Lowe to Freddie King and the Stones. But Holt adds more than enough confidence and verve to keep it engaging and ends up sounding like no one but himself. That's no easy feat, but with his list of credits, no one should be the least bit surprised.