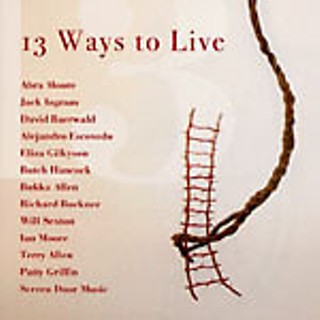 Bukka Allen, Robbie Gjersoe, and Brian Standefer have a band of sorts that they refer to as Screen Door Music. It's really a collaboration that primarily creates instrumental music for film and other forms of media. Separately, they've worked with the Flatlanders, Eliza Gilkyson, Patty Griffin, Alejandro Escovedo, Jack Ingram, and Bukka's father, Terry Allen. On that March 2003 day when the invasion of Iraq began, the trio contemplated ways to convey their reaction, and 13 Ways is the result. They contacted 13 of their musical compatriots with the direction to express themselves in any way they saw fit while Screen Door Music provided the musical backdrop. For sure it's mostly singer-songwriter fare, but musically, Richard Buckner, Abra Moore, and Butch Hancock are all coming from very different places, and yet 13 Ways flows with an uncommon flair and passionate urgency. Hancock's track, "The Damage Done," is the most overtly political and tips its pen to Dylan. Will Sexton contributes "Whittled by the Wind," with a stick-in-your-ear melody and a poke in the eye to the warmongering fool, while Patty Griffin recalls the protest era in a Judy Collins kind of way on "Dear Old Friend." Proceeds from 13 Ways benefit victims of the Iraq war, so if you're looking to salve those postelection blues this may be the cure and with multiple effect.