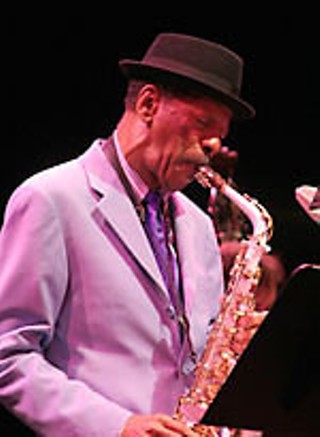 It had been decades since saxophonist Ornette Coleman last played in Austin, and even then you'd be hard pressed now to find anyone who was there. Long scorned as the leader of the free jazz revolution that hit N.Y. in 1959 and later for his radical harmolodic ideas equating harmony, melody, and rhythm, the Fort Worth-born, Texas jazz legend was back on his home turf, or as close as he ever gets these days, in front of an adoring audience more than ready to welcome him with open ears. Nattily attired in a powder-blue suit with a deep purple tie and black hat, the unassuming Coleman still possesses that instantly recognizable plaintive wail on his alto, a cry steeped in the blues that cuts through everything else on the stage. He played the trumpet and violin, but only intermittently. Coleman fronts a quartet that has long included his son Denardo on drums and, more recently, twin bass players who offered the feel of a chamber ensemble. Greg Cohen, also a member of John Zorn's Masada, a foursome modeled after Coleman's original quartet, bowed his instrument virtually the entire evening and, given plenty of solo space, provided the saxophonist with an intriguing foil and a group sound not heard on any of the leader's recordings. When Coleman picked up a violin left-handed and all three bowed together, they conjured up the spirit of a bizarre Texas hoedown. The music was dense at times, filled with Coleman's customary frenetic diction and the intricate, sometimes careening, interplay of the band. At other times, particularly on a couple of ballads, the sound could be spacious and delicate. The serrated edge of Coleman's playing can often belie the beauty of his lyricism. It ranges from playful, ecstatic fits of jubilation to a mournful, human wailing through his horn. After an 80-minute set, followed by a thunderous standing ovation from the nearly 2,000-strong audience, Coleman returned to encore with the blues. In the tradition of his early compositions, "Ramblin'" and "Blues Connotation," it brought the evening full circle and back to its Texas roots, roots that will always be an indelible part of Ornette Coleman's Lone Star legacy.