Godspeed, ODB. Say hi to Doug Sahm for us.

Has it really been five years since Texas music all-everything Doug Sahm passed away? Even his son Shawn can't believe it. "Lord, no," Shawn says. "In some ways it feels like yesterday, and in other ways it feels like forever." Even something like the Spike & Tyke cartoon show's "That's my boy" catchphrase brings the memories flooding back. "It's little things like that that hit the hardest," agrees Shawn. Otherwise, Sahm says his dad's posthumous profile has never been higher. A reissued Groover's Paradise is popular in Japan, while the Boerne-dwelling Shawn marvels, "I heard 'Cowboy Peyton Place' [via XM Satellite Radio] in Wal-Mart yesterday!" The online petition to add Sir Doug to the Rock & Roll Hall of Fame ballot, www.petitiononline.com/DougSahm/petition, is up to 455 signatures. Unfortunately, plans for a long-discussed career-spanning box set have hit a snag. Reluctant to say much for fear of causing further delays, Sahm mentions "other hands in the pie" and the fact that "they don't even know who played on a lot of those tracks." On a happier note, Shawn will join many of his dad's friends and admirers – Augie Meyers, Little Joe y la Familia, the Derailers, Bill Kirchen, the Texas Mavericks – for the annual Doug Sahm Day at Antone's tonight (Thursday). Some proceeds benefit ailing tenorman Rocky Morales, a lifelong Sahm pal and founder of the West Side Horns. Doors at 5:30pm, cover is $10.

He may be an internationally famous DJ, able to fill dance floors from New York to London to L.A. at the drop of a needle, but Austin's D:Fuse remains very much a musician at heart. So much so, in fact, that it's easy for him to chart the connections between drum kit and DJ booth. "What really drove me into becoming a DJ was that it was so much like a musical instrument," says Fuse, who spent four years in local industrial duo Culture Industry. "You've got to figure out how the music works abstractly so you can bring two records together and make a journey." Though he's released several singles and mix CDs, his brand-new Begin (System) allows him to journey back to the days before local turntablists like Filthy Rich and Herb inspired him to climb behind the Technics. "It was really me getting back into songwriting, writing lyrics again, and going back into basic song structures and melodies," he says. With contributions by 29 Palms, Grayarea, and Jes of Motorcycle, Begin incorporates a wide range of styles – trance, downtempo, dub, ambient – into a uniquely personal vision. "I wanted to make an album that people could identify with," he says. "Something electronic music people could understand, but that someone who might not be into electronic music could understand as well."

Look no further than this week's cover for proof that video games are occupying an ever-larger slice of the pop-culture pie, and that Austin is front and center in this ongoing revolution. To wit, local software house Aspyr announced this week it will publish Stubbs the Zombie in Rebel Without a Pulse, designer Alexander Seropian's first project since the paradigm-shifting Halo, next summer. Besides capitalizing on the recent wave of zombie chic (Shaun of the Dead, etc.), Stubbs should further reinforce the idea that, for up-and-coming bands, video games are the new radio. Aspyr's Chad Beck has assembled 13 OC-worthy bands – including Phantom Planet, the Walkmen, Death Cab for Cutie, the Raveonettes, the Flaming Lips, Ben Kweller, Oranger, and Austin's own Milton Mapes – for the soundtrack, due in March. Unlike games such as Grand Theft Auto, which merely license existing music, each band recorded a song specifically for the 1950s-set game. Thus, gamers will hear Cake doing "Strangers in the Night" and Milton Mapes crooning Rick Nelson's mournful "Lonesome Town" as they attempt to take over the fictional Punchbowl, Pa., by eating brains and employing an arsenal of, among other things, "gut grenades" and "unholy flatulence." "There's a lot of humor involved," Beck assures.

Fabi Reyna, guitarist with youthful roots-rockers the Flames, picks her way through Brenda Lee's "Sweet Nothins" at the Broken Spoke's 40th birthday party last week. The venerable dance hall was so full the floor sagged, as Austinites of all ages also enjoyed the warped vaudevillian antics of the White Ghost Shivers, pure country from Alvin Crow, and an all-star jam that saw Dale Watson and Chris Wall, backed by Redd Volkaert, trading vocals on Willie & Waylon's "Good Hearted Woman," Harlan Howard's "She's Gone, Gone, Gone," and trucker classic "Eastbound & Down." Mayor Will Wynn was on hand to proclaim "Broken Spoke Day," and he later chatted with Susan Antone, who had just seen Ray for the third time. "My soul is there," she said. 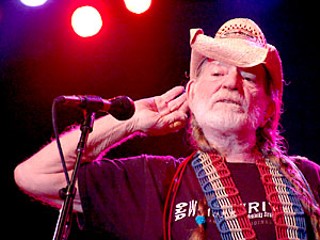 Willie Nelson, looking beatific, worked the crowd Monday night at the Austin Music Hall. Nelson massaged his trusty guitar Trigger like his recent bout with carpal tunnel syndrome was a distant memory, and astonished the three-quarter-full house by starting with "Living in the Promiseland" instead of "Whiskey River." His 90-minute set was marked by several sly segues – "Me and Bobby McGee" into "Me & Paul," "Blue Eyes Crying in the Rain" into "Blue Skies," etc. – and a mysterious beret-clad woman furiously painting a portrait of Nelson on the side of the stage. Because he's Willie Nelson, he didn't even throw in anything from new album It Always Will Be until almost the end.

Quote of the Week: "If you don't love Jesus, you can go to hell!" declared Billy Joe Shaver upon induction into the Nashville Songwriters' Hall of Fame. He's now an instant candidate for U.S. attorney general.

Austin Celtic Festival pariahs the Jolly Garogers will make up their abruptly shortened festival set 4pm Sunday at Mother Egan's. Free admission, but the hat will be passed for the Austin Children's Shelter. Cough up or walk the plank.

Because it's never too soon to strike while the iron is hot, Sony has reissued Los Lonely Boys' platinum 2003 debut with a bonus DVD and extra tracks, including Spanish versions of "Heaven" and "More Than Love" and a cover of Johnny Cash's "Ring of Fire." Usher's Confessions, one of the few discs to outsell the Boys in 2004, received similar treatment.

Baylor University is seeking submissions for its Diadeloso Music Festival April 14 in Waco. Ten bands will be selected to perform for a $10,000 grand prize. Applications and a $50 entry fee are due by Dec. 31; see www.baylor.edu/diadeloso or call 254/710-3322 for details.

More Bad News: Wu-Tang Clan cornerstone Ol' Dirty Bastard, 35, collapsed and died Friday at a Manhattan recording studio. The voice that uttered the immortal "I don't have no problem with you fucking me, but I have a little problem with you not fucking me" will rhyme no more.

On-and-off Austinite Luke Wilson, recently glimpsed enjoying Velvet Revolver at the Austin Music Hall, hosts Saturday Night Live this weekend with musical guests U2. Much, much more on the Best Band Ever next week.