Looking at this microwave world from the grassy knoll

Flanked by Erickson siblings Sumner (l) and Roky, Smile auteur Brian Wilson beams backstage at his Oct. 24 Backyard show. "Brian was really generous," says Sumner. "He asked, 'Did you like the concert?' and Roky said, 'It was the best one I ever saw.'" Due to the volume of well wishers in the backstage receiving line, the Ericksons and Wilson weren't able to visit long, but it was long enough. "Roky was in great spirits," relays Sumner. "He seemed to be really invigorated by the show."

Scott Weiland at Monday's long-awaited, twice-delayed Velvet Revolver Austin Music Hall show. Shirtless by the third song, the skeletal Weiland bounded across the stage so much he wound up using a lengthy Slash solo to suggestively towel off in front of Matt Sorum's drum kit. As the sizable crowd turned the ostensibly smoke-free venue into a Parisian sidewalk cafe, the Revolvers brought rock & roll misogyny and nostalgia in equal measure via their former bands' "It's So Easy," "Sex Type Thing," and "Used to Love Her." Awesome!

Politically charged synth-rockers This Microwave World have reached what frontman Sean O'Neal terms a "normal label handshake deal" with local imprint Tight Spot Records to release the quintet's full-length debut sometime next spring. "It's made us feel like we're not treading water anymore," says O'Neal, just back from voting on Election Day. The album, which they'll begin recording at Porch Light Studios this weekend, will include new material and songs from their Total Information Awareness and Love Your Zine Let's Go to Bed EPs, re-recorded with new drummer/old friend Kevin Bybee. Expect more intelligent dance music, and extra bump courtesy of bassist Brandon Loe. "Brandon's been listening to a lot of Motown lately," notes O'Neal. With keyboardist Erin Mikulenka back from a monthlong NYC holiday, O'Neal says things are "going great – we couldn't be happier." Besides the album, TMW is eagerly anticipating a December minitour of Dallas, Houston, and New Orleans with Spoon; O'Neal is particularly excited about their first-ever date at Dallas' Trees, where he and Bybee had some of their first rock experiences. "That's where I snuck in to see Mudhoney when I was 15," he says. "The club was 17 and up, so I changed my learner's permit to look like I was 17."

Flyering has long been one of the easiest, cheapest, most effective ways for bands to promote themselves. And most low-tech, at least until Austin's Kissinger went drinking at a Denver bar with local band Born in the Flood. Despite playing only a handful of shows, the Coloradoans exponentially increased their draw by burning a few songs onto CD-Rs and stapling them to their flyers. Kissinger decided to try it for Friday's show at the Flamingo Cantina, tacking on a few songs from the openers for good measure. "Some of these bands are kind of new and a lot of people might not have heard of them," says frontman Chopper. He means Dallas' Zwan-like Falcon Project and local electro upstarts Things That Go Pop. Acidic Austin trio the Pretty Please, who've drawn recent interest from Cocteau Twin and Bella Union label owner Simon Reynolds, are on the bill but not the CD. The total cost of 200 CD-Rs, sleeves, and flyers was a mere $40, and since Kissinger's next album won't be out until April, Chopper figures it's an excellent way to introduce the quartet's new, rockier output. But how effective will this newfangled campaign be? "We'll find out this weekend," he laughs.

What's in a name? If it's local quintet the Grassy Knoll Boys, quite a bit. Singer/guitarist Will Walden says it's both an obvious reference to the JFK assassination and a play on the frequency with which "Boys" finds its way into the names of bluegrass ensembles. In a broader sense, he hopes the slightly macabre moniker taps into the "Faulknerian" elements of the genre.

"It's sort of a joke, but not really a joke," he explains.

Walden, Dobro player David Hamburger, mandolinist Alex Rueb, banjoist Mark Cavage, and bassist Vance Hazen have been together about a year. Instead of trotting out the same old standards by Bill Monroe, the Stanley Brothers, and Flatt & Scruggs, they've folded everything from minstrel blues to field hollers into the bluegrass idiom.

On their debut, Buckeyed Rabbit, just picked up by local label Genuine Recordings, the Boys give a bluegrass spin to traditional Texas tunes like the Brazos Valley work song "Old Hannah" and Deep Ellum blues "See That My Grave Is Kept Clean." Meanwhile, originals like Hamburger's "Chickens" and Walden's "Darling Our Love" reflect a more contemporary outlook.

"It's Americana," Walden affirms, "but not gingham and overalls and square dancing."

After months of playing Threadgill's, Momos, and the Cactus Cafe, the Boys' biggest gig to date looms Friday, opening for the Del McCoury Band at the Texas Union Ballroom. Walden previously crossed paths with McCoury's outfit at an upstate New York festival back in college.

"Believe it or not, it was the same band," the Uvalde native says. "His hair was still black." 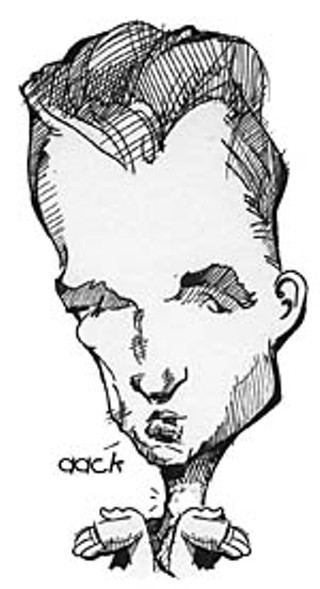 Thousands of pompadoured Central Texans had even more reason to be glum than usual when Morrissey, citing strained vocal cords, canceled last Friday's Backyard show. Judging by a review in last week's Dallas Morning News, Moz likely sustained the injury grousing about everything from U.S. politics to overzealous fans at his Oct. 27 Fort Worth show. The ex-Smith declined to reschedule, so refunds are available at point of purchase; call Star Tickets at 469-SHOW for info.

Los Lonely Boys have yet another famous fan: none other than Paul McCartney himself, who met up with the Garza brothers at Neil Young's annual Bridge School benefit Oct. 23-24 near San Francisco. Exclaiming "I know another Ringo!" upon meeting the LLB drummer, Macca discussed common influence the Everly Brothers and harmonized with the Boys on their new "My Loneliness." Listen for it at the Garzas' New Year's Eve Austin Music Hall show.

Attention all would-be Franz Ferdinands and Broken Social Scenes: The carved-in-stone final deadline for SXSW 05 applications is – in person – Tuesday, Nov. 9, 6pm-midnight, at Ruby's BBQ, 512 W. 29th St. Filling out the online app at www.sxsw.com by Monday means the processing fee is $20 as opposed to Tuesday's $30, but either way, send/bring a CD with at least three songs, photo, bio, and press kit.

Disco Hospital returns to Beerland Sunday, just in time for local shoegazers the Mona Jane's last show before relocating to New York. Warming up are the Swells, plus Things That Go Pop and, just back from Europe, DJ Rachel Goldstar.

After a quiet summer, wicked stoner-psych trio Tia Carrera settles back into their rightful happy-hour home at Room 710 this Friday, 7pm.

Beguiling indie-folksmiths Okkervil River have just released the five-song EP Sleep and Wake-Up Songs, both new material and leftovers from Down the River of Golden Dreams and their split CD with Julie Doiron. Look for a new album in early 2005.

The Adventures of Austin's March
Thin-slice this, bitch! SXSW 05 is on its way, and we've got names