One Night on Red River 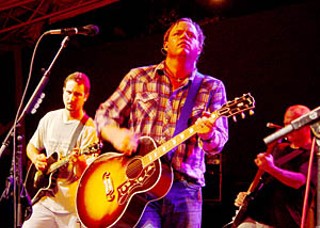 There came a Tuesday night in the middle of October when Red River dried up, the strip as empty as George W.'s promises. Club owners mumble to themselves, kegs full of Lone Star chill, while regulars count their pennies. Tumbleweeds bounce off dirty marquees promising nights of rock – mostly from last weekend.

After recovering from this summer's "31 Nights" (austinchronicle.com/issues/dispatch/2004-09-10), I've returned to my regular beat. One night on Red River. With a healthy head and soft feet, the sweet smell of beer and piss is calling. And yes, all you letter-writers, I'm feeling much better. Thanks for your concern. Nevertheless, the question remains: Is Red River still the vivacious, exciting hotbed of local rock & roll activity?

1) Right now, well before the weekend, there's a plethora of genres on this strip of seven live-music venues and three bars, and nobody seems to notice.

2) Austin prides itself on the vitality of its live music scene, and here, where the scene breathes noxious shot-bar fumes from Sixth Street, nobody seems to care.

3) The country is in shambles. Bank accounts are drained; gas costs up to $2 a gallon. Jobs are scarce, and musicians are going broke. Everybody seems helpless.

Warning: You better try this at home, or else risk losing the hard rock, techno, dance punk, and country that sets River City apart from Bayou City.

7111/2 Red River; 479-ROCK; www.beerlandtexas.com (6:30pm) Walking into Beerland during daylight hours is always disorienting, but tonight it's worse. There stands owner Randall Stockton by the pool tables with two buddies – the only folks in the joint. In 30 minutes, they'll roll Dawn of the Dead, and God willing, there will be some zombies present to watch. Happy hour doesn't fare well in a community of unemployed, especially one with more options than Usher has girlfriends. "These new guys must think we're making tons of money," Stockton quips. "Well, since we don't sell cocaine, we actually have to bill out the bar every once in a while."

801 Red River; 480-8341; www.stubbsaustin.com (7:15pm) If there's one promise in Austin, it's the Texas music crowd. With their Stetsons, you'd think you were in George Strait country, but their flip-flops give it away. Pat Green, who sells out amphitheatres, fills not half this back yard for his CD release. Blame it on baseball. Ninety minutes after his set time, Green takes the stage. The crowd is irritated, and after playing his first "hit" off the new Lucky Ones, so am I.

912 Red River; 542-4010 (8:45pm) There's a sign taped to the gate. "Dear Beloved Friends of the Caucus, it is with much regret that we inform you there will be no Acoustic Indulgence this evening. Even more regrettably, the Caucus will be closed indefinitely."

900 Red River; 457-0900 (8:50pm) Karaoke night with Ms. Emily and her 20 voyeurs. Crickets chirp before Show & Tell (stage name) rips out a raucous "Little Red Corvette." Her friends giggle. Fashionistas sit opposite the limestone wall, staring blankly. Ice-cold Lone Star, but the fancy $6 shots and status as the place to be seen inflate de Ville's life preserver. As alluring as those $8 Warehouse District martinis are, this place is more chic. If Oilcan Harry's were across the street, it'd be even better.

611 Red River; 472-4272 (9:30pm) Spiros' Tuesday night Latin dance classes weren't enough to balance the books, so the disco has closed its weekday doors. That's a relief only because I was worried my shoes weren't up to the dress code.

714 Red River; 478-4022 (9:35pm) There's something very strange about watching baseball in an almost-empty Irish bar with Pat Green booming from across the street. A cider ordered meets with an accented barkeep explaining that they couldn't sell good cider so they no longer carry anything but Hard Core. Whiskey then, for the seventh inning stretch. "God Bless America" sings an operatic tenor. Or was that Pat Green?

617 Red River; 478-0099 (10:10pm) It's even stranger to watch baseball in a totally empty techno bar where DJs usually drop heavy beats. Joe, the bartender, roots for the Red Sox. A young man with baggy pants and close-cut hair yells into the club, "I thought there was s'posed to be music here tonight!" An even younger DJ spins one cut, then returns to the game. You know it's slow when an 18-year-old DJ would rather watch Curt Schilling shut out the Yankees with a bloody sock than showcase his vinyl.

710 Red River; 476-0997; www.room710.com (10:45pm) What used to be a prime hangout is, at least on this Tuesday night, Red River's best tragic example. A bar designed to cater to drinkers and music lovers alike hardly pulls in either. With Jackalope and Ed's Cucaracha on Sixth drawing away from the strip, owners Woody and Adriana Wiedeman are brainstorming floating devices. "It's up to me as a mid-30s guy to find out who the younger bands are," Wiedeman pundits. Does schtick lure in the young ones? No. Schlong Daddy rocks for 10.

603 Red River; 477-EMOS; www.emosaustin.com (11:20pm) Home away from home. The club's worried booker, Graham Williams, sighs at the door. Clinic hasn't sold out. Clinic should sell out. Even here, the pain of empty pockets is felt. Owner Frank Hendrix blames barrels of oil; the extra $30 hardcores once spent on cheap brew now fills their gas tank. The back room slowly fills with hipsters as the masked Liverpudlians take the stage. Three songs into the set, the songs already sound the same. That's the curse of their Suicide hum. And enough with the surgical scrubs, already. For one thing, green is not their color. The eerie melodica blasts with Ade Blackburn's lulling vocals in a fog-covered 19th-century alley. Scary.

705 Red River; 478-2979; www.elysiumonline.net (12:05am) Aren't Elysium's fetish nights as popular as their Regression Sundays? Isn't that the way it's done: Cater to a niche and they will come? Apparently not. It's Sappho's Isle with DJ Amerykah, lesbian night at Elysium. Seven people on the dance floor, three of them men, and the DJ's spinning Sir Mix-a-Lot. I've nothing against Sir Mix-a-Lot – in fact, I have a big butt – but maybe this isn't the best way to lure in Sappho's daughters. Maybe Annie Lennox would work better. Maybe this is a gothic Tuesday. Maybe we're in trouble.

715 Red River; 474-1084; www.redeyedfly.com (12:30am) Doe Montoya has a voice like a foghorn atop the cliffs of Dover. If you can't hear its beautiful wail, you deserve to crash and burn. 20-Eyed Dragon crams inside at the Fly, whose room is near empty. Eliot Haynes thumps his five-string bass like he's drilling for oil, and Montoya, the ex-Smugglette (of Diamond fame), seduces and scolds at the same time.

720 Red River; 236-0188; www.headhuntersclub.com (1am) The old tiki bar learned to rock, and Natchet Taylor is balls-out shredding to prove it. The sweaty frontman leans into the modest crowd (modest in a glass half-full kind of way) and morphs into Johnny Rotten. The drinkers up front are another story: two guys in golf shirts, three in wife beaters, and Wendy WWAD. That's punk rock, all right. The Ramones make their legacy felt – mostly postmortem – and the clock ticks down another notch.

7111/2 Red River; 479-ROCK; www.beerlandtexas.com (1:30am) Since last here (seven hours ago), eight more regulars have shown up. Unfortunately, most were in the opening bands. Three Pot Offy is somewhere between Motörhead and the Reverend Horton Heat. They graciously thank the bands before and explain, "I like fuel injection, but let's face it: Carburation rules!" The pistol sounds. Cutoffs and plaid shirt notwithstanding, this band rocks like Nashville Pussy. An exception(al) show: rockabilly, ska, pop, and punk on one bill. And Randall Stockton loves it. "The scene has gotten so cliquish now, you can't have the diversity that made Austin cool." Fight the good fight, Randall. Keep a candle in the window for Austin live music. 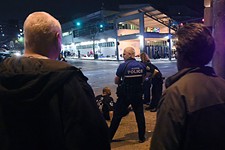