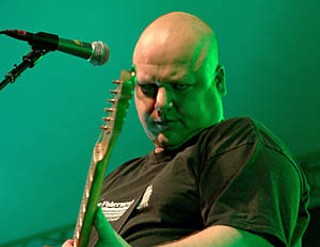 Stubb's, Oct. 20 The black eyeliner was already dripping down their frontman's chubby cheeks Wednesday night when the Pixies took the stage amidst a deafening roar from sold-out Stubb's. What decade was it again? Boston's reunited bombers – aka indie rock's most influential act with the shortest lifespan – brought 1989 right to Austin's doorstep covered in dry ice and heavy basslines, lacking only the obvious animosity that existed before. With the opening chords of "Bone Machine," Frank Black, Kim Deal, Joey Santiago, and David Lovering led the masses back to their respective bedrooms to listen to Surfer Rosa in the dark, waiting for their crushes to call. Without speaking a word, the four swept through most of Come on Pilgrim and Doolittle (including "Here Comes Your Man") only touching on later LPs Bossa Nova ("Velouria") and Trompe le Monde ("U-Mass," "Planet of Sound"). The world's biggest sing-along was on, harmonies soaring from the sloping hill. How every indie kid 25 and under knows all the words to Deal's B-side "In Heaven (The Lady in the Radiator Song)" can only be explained one way: Deal is the band's heart and soul. So much so that in double-vox favorites "Debaser" and "Where Is My Mind," her backing vocals were aped louder and with much more zeal than Black's. It was only appropriate, then, that after Santiago's robot walk to and from his stationary, looping guitar solo on "Vamos," the encore comprised three Deal-heavy tracks. With closer "Gigantic," the howling from the fans was deafening. Deal hunched her shoulders and graciously walked to the front of the stage alongside the confident frontman, guitarist, and rock-solid drummer/ magician Lovering, grinning ear to ear. Where she left, the roar followed. I believe even Frank Black cracked a smile.