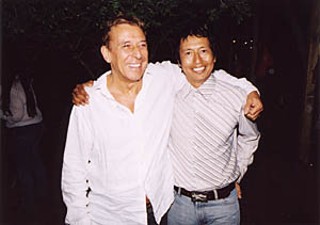 Blest (Moon Caravan) When considering John Cale's storied career, remember he came into rock & roll through the backstage door, via the Velvet Underground. The classical music background developed in his native Wales, the one that met with the New York avant-garde in the Sixties, was stunningly reintroduced on the recent Sun Blindness Music. With its pre-natal "Sister Ray" prototype, "Summer Heat," Sun Blindness suggested that the Velvets were a mere (albeit profound) stepping stone for his lengthy oeuvre. On HoboSapiens, Cale reasserts his position in the pantheon of musicians who matter. At 61, he's as creative and subversive as ever, sure of his craft and comfortable in his art. Witness the bright "Things" and doppelgänger "Things X," where he deconstructs his own work, not to mention "Magritte," which echoes the viola elegance of Paris 1919. Cale has also created one of his loveliest compositions in the ethereal "Over Her Head." Hobo's beauty lies in its organic cross-pollination of electronic wizardry and instrumentation, an aurally stunning tour de force in a lifetime blessed with many. Cale's influence on generations of musicians is understood, but nowhere is it more apparent than with guitarist Sturgis Nikides and vocalist Deerfrance, both of whom released their first solo albums this year. Nikides played guitar for the latter half of Cale's '79-'80 Sabotage tour, but those searing leads bear little resemblance to the fine and moody National Steel performances on Man of Steel. With a voice cured in the smoke of countless nightclubs, Nikides travels a contemporary road of nine captivating, melancholy compositions and a fine rendering of the Rolling Stones' "Play With Fire." "I'm not easily impressed," he sings on "Heartbreak Lost & Found," but he pays homage to the Delta bluesmen on "Dusted." Deerfrance was the honey-voiced, 6-foot, pink-haired punk rock darling of CBGBs in the late-Seventies when Cale tapped her for the band. The dreamy pop of Blest is her impressive debut, a delightful collection of 15 originals (save for Cale's "Only Time Will Tell") that lure with her china-doll vocals. "Operation," "Cher O' Bowlies," and "Tramp" are outstanding, while "Dark (Nico)" invokes the Velvet's Teutonic vocalist. The choice of "Only Time Will Tell" to end the disc is indeed telling. The song was Deerfrance's spotlight moment during the heady days of Cale's tour and it's as sweet and tender 25 years later, delivered as it is with the patina of wisdom and age.