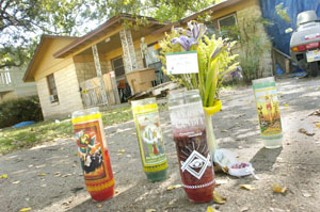 A house is not a motel: Joe Bates Memorial in front of his house (Photo By John Anderson)

Investigators are still trying to piece together what happened to former Joe's Generic Bar owner Joe Bates, who was found dead of gunshot wounds last Wednesday at his north-central Austin home. He was 51. At press time, the investigation was ongoing and police had few clues and no suspects. "We don't know that much about it," APD Public Information Manager Kevin Buchman said Tuesday. "There's very limited information on this one." Officers discovered Bates' body after his neighbors, concerned they hadn't seen him for a while, called 911; Bates appeared to have been dead "for some time," Buchman said. Bates had recently closed Joe's Generic, a Sixth Street fixture for nearly two decades, because the building's owner wanted to sell the space to the neighboring Blind Pig Pub, but Bates was said to be looking for a new location. "He had great pride in that venue and really and truly loved blues," says Beerland owner Randall Stockton, who worked for Bates at Aaron's Rock & Roll in Northcross Mall and the Bates Motel on Sixth Street. Bates would call him at Aaron's and talk for hours, remembers Stockton, but the two seldom met face to face. "When I worked at Bates, I'd drive to his house and slip the money envelope under the door," he says. "That's about all our interaction." Stockton, who also played Joe's Generic with his band the Headhunters, says the shy and reclusive Bates hardly ever ventured downtown. "I always got the feeling he was a guy who got burned a couple of times," he allows. "I'm indebted to him because he let me slip into that job." A memorial concert for Bates is in the early planning stages; police urge anyone with information on the case to call the homicide tip line at 477-3588.

"Vertigo" is a great song, and the commercial is killer, but you don't have to be a superstar like Best Band Ever™ U2 to be a hit on iTunes. Austin's Tucker Livingston found this out firsthand recently when Apple's MP3 nexus prominently displayed his 2004 self-titled debut on its folk page. "iTunes loved my record, so they decided to feature me," says Livingston, whose album rose as high as No. 6 on the iTunes folk chart. More impressively, Livingston was the only unsigned artist in iTunes' folk Top 100, even outselling sensitive Irishman Damien Rice at one point. Lately his album has been bouncing around the chart's lower regions, as Livingston adjusts to the mercurial nature of online traffic. "I'll be on there, and 30 minutes later, I'll be off again," he says. The record is also getting play on XM Satellite Radio's unsigned artists channel, and Livingston debuted several new songs at his sold-out Cactus Cafe show last week. The next night he played the Austin Film Festival's opening-night party at the Driskill, where like many musicians before him, he barely survived the perils of the open bar. "I was drinking candle wax and losing it," he admits. Flaming Lips frontman Wayne Coyne rocks out on his cartoon bass while filming the video for "SpongeBob and Patrick Confront the Psychic Wall of Energy," the first single from the forthcoming SpongeBob SquarePants soundtrack, at Austin Studios last weekend. The Oklahomans take part in numerous animated capers, including a bathtub sequence that finds the band performing in their familiar hamster-wheel balls amid an ocean of bubbles. Austinite Bradley Beesley co-directed the video. 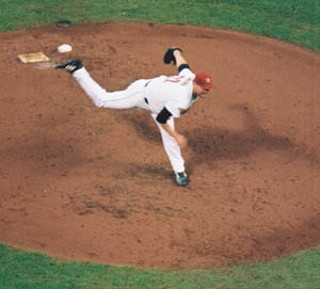 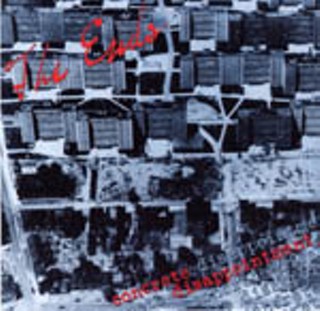 WHAT DO I GET? Sorry's razor-sharp melodies were reminiscent of class of '77 alumni the Buzzcocks; this time out, Ian End's sneering vox position the band closer to the Dead Boys. The other Ends toss in a smattering of Exile on Main Street grit for good measure.

CD release Saturday at Beerland with labelmates the Spits and locals the Winks and Faster Disaster.

From over the hills and far away, Robert Plant has confirmed as keynote speaker for SXSW 2005. Local cover band Pudge Zeppelin said to be beside themselves.

After 16 years at Austin's metal mecca the Back Room, the last 12 as general manager, Mark Olivarez recently stepped down to take another position with club owner Ronnie Roark's Roark Amusement & Vending. "I figured it was time for me to make a change, so I took the job," Olivarez said in an e-mail last week. Longtime Back Roomers Eddie Vasquez, Sean McCarthy, and Tammy Moore have assumed management duties, but Olivarez will remain as an adviser. "The Back Room will continue to be the mighty monolith of metal," he assures.

Hipster barometer PitchforkMedia.com reported last Friday that Spoon has finished recording their fifth LP at drummer Jim Eno's home studio. No title or release date yet, but songs include "Merchants of Soul," "The Delicate Place," "Sister Jack," and "I Summon You." Demos of the last two are available at www.spoontheband.com.

With a high-energy mix of funk, rock, and jam, Sister 7 rose from humble beginnings at their weekly Black Cat gigs (as Little Sister) to become one of the most popular Austin bands of the Nineties. The group reunites for the first time since 2000 at Momos Nov. 5 and 6 with another Steamboat veteran, former Breedlove singer Dan Dyer. Tickets, $20, available at the door only.

It's another high-stakes Roller Derby weekend, with both local leagues in action. The Hustlers and Honky-Tonk Heartbreakers meet for the Texas Rollergirls championship 6:30pm Sunday at Playland, with the Hot Rod Honeys versus the Hell Marys for third place and music from Seattle's Spits, the White Ghost Shivers, and the Dead Motley Sex Maidens. Meanwhile, the Lonestar Rollergirls break in their new and improved Thunderdome digs at 619 Tillery, 7pm Sunday, as the Holy Rollers battle the Rhinestone Cowgirls and Pretty Pretty and the Rockland Eagles supply the tunes. Play nice, ladies. Nice and rough.

"TCB" Correction Corner: Due to a brain malfunction, "TCB" listed the wrong e-mail address for Don Walser in last week's column. He can be reached at don@walserwebworks.com.