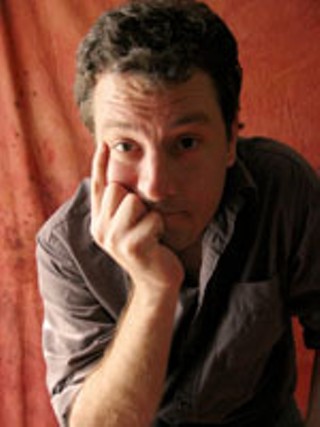 On a smoky Sunday night at the Saxon Pub, Walter Tragert has six women doing the snake dance two bars into his opening number. You know, that sinewy, slinky, nondescript shimmying women do when they're dancing together and men are watching. The hip sway says a lot – "Look at me! I look good! I feel good!" – but what it means is something else. Right now, it means, "I like your music."

For Tragert, that's good enough. The 38-year-old from Maryland released his second album, Lousy With Desire, this past spring to unanimous critical acclaim for its evocative neo-soul that's as informed by the art of songwriting as it is by Motown ("SXSW Records," Music, March 19, 2004)

Produced by Scrappy Jud Newcomb, the songs burst forth with a joyous exhilaration of one who has seen the light or come back from the dead. It's earned praise from fellow musicians such as Jon Dee Graham and KGSR programming director Jody Denberg. Despite the sometimes-wistful tone of the lyrics, it's obvious Tragert embraces big, sweet life with a wet kiss. And he should, because he once slipped into darkness and came out on the other side.

Singing on the Radio

Walter Tragert is sitting at El Sol y La Luna on South Congress. With a quesadilla in hand, he recalls growing up in a rural community outside Cleveland, Ohio, where he was born.

"We had a couple of acres of land, a lake with a canoe in our back yard, caves in the woods. It was paradise for a little boy to run around. I listened to a lot of AM radio. When I moved to Maryland at age 9, there was a radio station right down the road, the only one you could get because it powered out all the other radio stations. It was really ethnically diverse, so I heard a lot of soul, R&B – it really opened my eyes to music. As I grew up, I started listening to more and more soul stations from Washington D.C. Real local stuff."

With older brothers who played music and parents who were musically inclined, Tragert got his first guitar at age 6, but his hands were still too small for the neck. Yet he persevered, playing in Buffalo Springfield cover bands and working pizza parlor gigs. Musically, Tragert calls himself an early bloomer.

"At 15, I'd put ads up at local community colleges – 'Guitar player looking for band.' My mom would have to drive me to their houses. Thirty-five-year-old guys would answer the door with, 'Who the hell are you? Are you here to see my daughter?' I'd have my guitar case in hand and they'd let me play with them one time and then be like, 'We don't want a 15-year-old kid in the band.' It was hard to find people who wanted to play what I did, and when I did, they were in their 30s. It wasn't 'til I moved to Austin that I found peers."

Austin in 1991 was blooming when Walter Tragert relocated here, having just left a stint in children's musical theatre. Among the first shows he recalls was a back-to-school show at UT with the Reivers and Poi Dog Pondering. Across the street, he found Loose Diamonds at the Hole in the Wall. He knew he'd come to the right place.

Determined to court those he admired, he handed a cassette tape to Newcomb, the Loose Diamonds' guitarist, in hopes of landing an opening gig. What he didn't know was that the Diamonds' version of listening to audition tapes was to toss them out of their van during road trips.

"It was called 'tape sailing,'" laughs Newcomb, his lanky frame folded into a chair at the Saxon. "Something Troy [Campbell] started before I joined the band. We'd listen to the tape and if we didn't like it, we'd –"

He mimed sailing it out the window.

Newcomb and the Diamonds liked what they heard, however, and Tragert landed a few opening gigs with them. Both ended up in the soul cover band the Atlantics, with Tragert taking on "Baby Walter" as his Atlantics moniker. Newcomb talks with amazement at the bond he and Tragert developed.

"We really click. We have this thing we call 'The Purple Jungle.' I don't know why we call it that. It's where all our musical influences and musical loves overlap. We're moved by almost the exact same things. If there's a Staple Singers record on and Mavis does one little thing with her voice, I can look at Walter and he's hearing the same thing. So we call it going into 'The Purple Jungle.' He'll do something vocally that knocks me out, and I can reference something on guitar that he'll get. So, yeah, we're tight."

"In the winter of 1995, I made my first CD, Heavy Just the Same. Then life took a strange turn for me. I had a nervous breakdown in 1996 and moved back to D.C. for more than a year. I didn't have the chance to promote it or enjoy it, so it was dead in the water.

"It's not easy to talk about. I snapped. I had too much going on, a lot of stress. Unresolved family stuff. A relationship that wasn't working out. Throw a little substance abuse on top and mix well. I just popped."

Tragert's demeanor has changed over the course of the interview. When he speaks of the breakdown, he's clearly on guard about what to say about this life-changing episode. The quesadillas are only half-eaten and his hands are in his lap. He's obviously torn about revealing such details but determined to show how music helped bring him back.

"At one point, I'd almost lost my identity as a person, I was so far gone. They were giving me drug after drug, shock therapy, the whole bit. But I was still playing. At one hospital, I refused to be admitted without my guitar. I was still playing. Don't know what I was playing, but I was playing. When things settled down, I began to sort things out. Before I moved back, I bought a 4-track and started working."

Lousy With Desire was the result. Most of the songs on it are new, though he confesses "Under the Rainbow" is a relic of his 20s. He gleefully cites a Japanese translation of a Chronicle review.

"It used the words 'mysterious,' 'loner,' and 'hero,'" beams Tragert, picking up a quesadilla. "I've sold more records in Japan than at Waterloo, mainly from exposure during South by Southwest over the years.

"Yeah, I had something to prove. When I came back, it was awkward for people who didn't know how to treat me. Some people were afraid, but I had a group of friends here in Austin – Scrappy, Cornbread, all the guys I play with now and some other friends – who stuck with me. On Lousy With Desire, I wanted to make a statement: I'm back."

What Else Can I Do

A week after our lunch, the phone rings. It's Tragert, and he had something else to say.

"It was really uncomfortable to talk about all that crap I went through," he begins slowly. "It took me so long to get over the stigma of it all; this is a good opportunity to help somebody, talking about this in print. Maybe I was being selfish in not wanting anyone to know about this, but the reality is, it was a really hard time for me, my friends, my family.

"Bipolar disorder is a wastebasket category for anything they can't really figure out. All the treatment I went through put me through the ringer. I had to recover from that more than anything. There are things I saw that most people will never see. I saw visions. As painful as it was, it's part of who I am. It was intense. I wouldn't say I wish it was different, but I wish it wasn't as hard on the people around me.

"If someone like that is reading this, it's important they know there's hope. There is a light at the end of the tunnel. They don't tell you that. Look down that tunnel. See the guy waving? That's me. 'Hi!'

"I wake up every day grateful.

"The SIMS Foundation is helping me out now. Yeah. I affectionately call them 'Looney Tunes.' Those guys have helped me out more than once, and I've done benefits for them and will continue to. I might be a lot stronger than others out there now. I can handle pretty much anything at this point. I am well-equipped to live the second half of my life as a badass."

Walter Tragert plays every Sunday at the Saxon Pub, 10:30pm, after the Resentments.