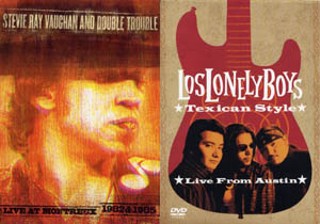 It may not have been Dylan plugging in at Newport, but Stevie Ray Vaughan would have had a much different career if he and Double Trouble had never played the Montreux International Jazz Festival in July 1982. For starters, he must have walked offstage after his 66-minute set thinking he might not have much of a career at all. Accustomed to more traditional, acoustic fare befitting a proper "blues night," the Euro audience was shocked and appalled by Vaughan's electric firestorm, and they let him know: After every song, the boos get louder and louder. Even today, the effect is jarring, but two people who weren't booing were David Bowie and Jackson Browne. Both offered Vaughan encouragement after his disappointing reception and, more importantly, opportunities. Bowie wanted him to come play on the Let's Dance album and tour, and Browne offered free use of his L.A. studio, where SRV & DT laid down tracks that eventually became Epic debut Texas Flood. As Browne tells it on the accompanying Success in Disguise documentary, if you offer a ragtag Texas trio free recording time, they're going to take you up on it. When the guitarist returned to Montreux in 1985, wearing more scarves than one of Steven Tyler's microphones, only "Texas Flood" and "Pride and Joy" remained from the '82 set, Houston-born Johnny Clyde Copeland sitting in for three smokin' songs, and the crowd cheering him like the rock star he was. Equally gratifying is watching Los Lonely Boys bask in the love at their free SXSW 04 Auditorium Shores show. Fresh off winning a pile of Austin Music Awards, the Garza brothers practically glow as they finesse 90 minutes of "Texican rock & roll." Amusing bonus features capture the Boys flubbing radio-station IDs, touring hometown San Angelo, and breaking up to eldest brother Henry's uncanny Sean Connery impression.