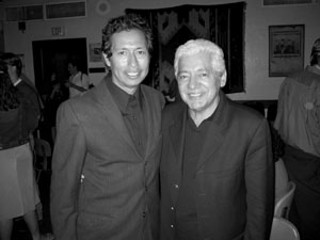 The monumental impact of Por Vida: A Tribute to the Songs of Alejandro Escovedo ("Phases and Stages," July 23, 2004) isn't ultimately in its 31 covers as it's in the caliber of roster. Having Lucinda Williams, Steve Earle, Lenny Kaye, John Cale, Ian McLagan, Bob Neuwirth, Ian Hunter, and Charlie Musselwhite, to name but a handful, cover Escovedo's confessional catalog put into stark relief something Austinites have known for the better part of two decades: Escovedo's talent is as singular as his home state. On the eve of his two shows this weekend at the Texas Union Theatre, a rarity in that hepatitis C forced Escovedo from the live arena almost two years ago, the Austin icon was characteristically candid about his health – physically, mentally, spiritually.

Austin Chronicle: The obvious first question, how are you feeling?

AC: Did you finish the treatment?

AC: Was it that brutal?

AE: Yeah, it was that brutal. I got sick again. I got really sick again.

AC: It was better, then, not to finish it?

AE: It was my decision, but yeah, I felt like it was better for me not to take it than to take it.

AC: How long have you been off the treatment?

AC: And you're starting to feel normal again – normal enough to do some live shows?

AC: Is that the impetus behind these Texas Union Theatre shows, to see how it goes?

AE: The shows are just ... well, I wanna play. It's been a long time. Like, I was supposed to go to Chicago in August and I canceled that because I wasn't ready physically to do it. My doctors told me that once I had finished taking the medicine that it would take me a year of recovery. So, I'm just trying to take it easy. In February, I'm supposed to do two shows to make up for the ones I missed. Then in March, I've booked three shows in D.C. But it's all done differently now, no van driving. They're all pretty comfortable shows, no smoking and things like that.

AC: The show at the Continental Club during SXSW was great. How did it feel from your end?

AE: It was really hard physically – hard to stand up there. I was self-conscious. I didn't feel relaxed. I think the best part of the whole show was just seeing everybody. It was a homecoming of sorts. In that respect, it did more for me than physically. Physically, to be quite honest, it set me back a bit. But mentally and spiritually, it was a really healthy experience.

AC: No man likes people knowing he's sick. How have you dealt with that?

AE: Well, I pretty much hid out. [Laughs] I tried not to be around people, other than my family. Someday I'll tell the whole story, but there's a lot that comes with illness. You lose a lot of confidence when things start happening to you physically – you deal with your vanity, your pride, your so-called masculine sexuality. It's pretty debilitating. It really messes with your head. I was very fortunate to not be living in Austin where I saw someone every day who was asking me how I was. I've retired out here to the country where I can just concentrate on trying to get better, rehabilitating myself.

AC: The Por Vida tribute must have been a real shot in the arm.

AE: This is gonna sound funny, but really, it was the best medicine of all. Outside of being close to my family and having their support, that was what really picked me up and made me want to start playing again. It inspired me to want to continue being a musician.

AC: The caliber of talent on it is flooring.

AE: It is. I don't know how that happened. [Laughs]

AC: What were your favorite tracks?

AE: You know what struck me the deepest emotionally? Javier [Escovedo]'s version of "The Rain Won't Help You When It's Over." Because it brought back all those great things we did together. We used to paint houses during the day, and then come home with a 12-pack of Meister Bräu – go into our little garage there in Hyde Park and play all night long. That was the first song I ever wrote, and I wrote it with him. It brought back that innocence and the love we had for what we were doing at that time.

The True Believers are the most important band I've ever been in. The solo things that happened afterward wouldn't have happened if I hadn't been in that band. So, that song – and the fact that Tony Kinman is on the track. I never expected that. [Laughs] We were very close during the Rank and File days, him and I especially. It brought back the San Francisco days and the early Austin days, and just how important they were to me.

AC: In that sense, it's great to see Jon Dee Graham opening these two shows.

AE: Oh yeah, and Jon Dee's version of "Helpless" [on Por Vida] is so killer. When we first got Jon Dee, I kinda lied to get him into the True Believers. [Laughs] I think we told him that we had a record deal or something. We really wanted him in the band, and he was so shy at first about his songs and singing. We pushed him up there the whole time, and he developed into the monster he is today, which is just awesome. He was always a great songwriter.

AC: Have you heard this Canadian tribute Escovedo 101? [www.songsofalejandro.com]

AE: [Laughing] Yeah. It's really awesome. One of the first things we did when we starting playing was we traveled a lot. That was the punk rock thing. We got a van and we traveled. Vancouver, and Canada, was a great place for us. First with Rank and File and then with the Believers, we spent a lot of time in Canada. So we have some deep friendships there. The people who put this together did it on their own. So, yeah, it's really – I don't know what to say about it. It's overwhelming in a way.

AC: Overwhelming, like having John Cale cover one of your songs?

AE: Cale's version especially ... I don't know how he does it. I never would have thought of anything close to what he did, and it's so beautiful. His voice is so powerful. He was so generous, really. Both him and Ian Hunter were so generous – Ian McLagan. All the older musicians, the guys I used to listen to all the time. They were all just so amazingly kind. I mean these guys were rock stars, back in the day when it was different. They were just so beautiful to me. It was unbelievable.

AC: Given your love of Mott the Hoople, having Ian Hunter on Por Vida brings it all full circle.

AE: It's amazing. I tried to articulate this before, but listening to records, right? All your life you listen to these records. When I started playing, I wanted to be like them, sound like them. I wanted to be like them before I wanted to sound like them. We always used to say the Believers were going to be the Southwest Mott the Hoople. Doing their songs all these years, then to hear it come back at you like that, like Ian McLagan's track. It's as if I had finally gotten it right somehow. Because you never sound like they sound, you just try, and hope that a little bit of magic rubs off somehow.

That period of time, I was still taking the medicine. These tracks would come in, and I'd sit there late at night listening to this stuff. I had an intensely emotional reaction to a lot of it: "Man, I can't believe this is happening." I was in bands cause I wanted to have cool clothes and see the world through cool sunglasses, basically. I never even thought I'd write a song, to be quite honest.

AC: You've stepped through the mirror. It's no longer a reflection of what you'd like to be. Suddenly you're on the other side.

AE: Steve Berlin [of Los Lobos] once told me, "You know, you have to stop looking at your heroes like that." Cause I was always so hero struck. He said, "You're peers with them." And I never bought it. It's not like I feel like I'm their peer, but [with Por Vida] they've given me their okay in a big huge way. "You're all right, man." I don't want to get maudlin on you, but man, it's worth everything. It's worth everything that's happened.