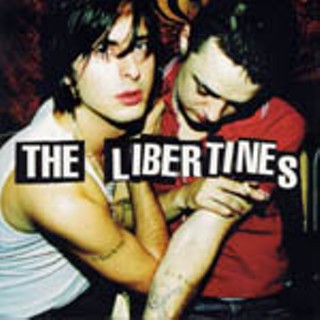 (Rough Trade) Calling time on 2002's Up the Bracket, the Libertines polished off their Strokes-y debut with an unbilled skiffle, a spiffy little squawker whose most coherent line involved two more drinks then slipping under the table. Two years later, The Libertines' bonus strummer is decidedly more sober, a lost-girl lament "choking and smoking" itself into a hole. C'est la vie, when you're liberator is Pete "What a Waster" Doherty, in and out of rehab, on and off tours, up and down with the Rolling Stones. Or in the case of the Libertines sophomore splatter-all, the Kinks. Where Mick Jones poured no small amount of kerosene on Bracket, this time the Clash city rocker sands down the wood grain instead of serving it up by the pint. The results are as ebullient as they are confessional. When Doherty's Dave Davies, Libertines co-dependent Carl Barat, isn't reassuring his brother in chaos ("Can't Stand Me Now"), he's forgiving him in song ("What Became of the Likely Lads"). Said tracks bracket The Libertines, and save for "Boys in the Band" from the first LP, they're the UK lot's tops. Between them lie the positively Ray Davies "Don't Be Shy," gleefully Arthur-ish "The Man Who Would Be King," and tea time ditty "What Katie Did." Britpop hasn't been this tuneful since Blur were still charmless men. The remorseful "Music When the Lights Go Out" and "The Ha Ha Wall" balance the LP's narcissism, though a sea shanty always lightens the mood ("The Tomblands"). Let's all drink to the death of a clown.