THE HEART OF THE MATTER

Lone Star Eagle/activist Don Henley mostly let his song titles do the talking at Sunday's Backyard gig, which benefited the Texas League of Conservation Voters. Leonard Cohen's "Everybody Knows" was pointed, though perhaps not as much as Henley's remembrance of playing Austin frats, "You're Not Drinking Enough." Encores "I Will Not Go Quietly" and closer "Desperado" got the point across nonetheless.

Even though they've been spending most of their time lately as the more alt-rock-oriented Unified, Vallejo has scored a major hit with "So Damn Beautiful." In New Zealand. That's where New Zealand Idol runner-up Michael Murphy recorded the song and reportedly tried to pass it off as his own. He's since acknowledged the song's true origin, but the story made headlines for weeks in the land of Lord of the Rings and still amuses the Vallejo brothers to no end. "We're having fun with it," says drummer Alex Vallejo, who swears singing brother A.J. is New Zealand's "latest Latin heartthrob." Besides raising their profile in Kiwi country, "So Damn Beautiful" has given Vallejo the last laugh of sorts on former label Sony. The group co-wrote the song in February 2002 with Miami-based Chris Rodriguez and submitted it as part of what they thought would be the follow-up to 2000's Into the New. Sony "didn't hear a hit" and dropped the band soon after. It appears on 2002's self-released Stereo, and Vallejo admits the karmic rewards will probably outweigh the financial ones. "We're probably not going to make two cents off it," reasons Alex. "New Zealand's about as big as, what, Alabama?"

They've won raves as G'N'R alter ego Mr. Brownstone, so perhaps it's poetic justice that Cruiserweight's long-awaited first album won't be out for a while yet. But, unlike Axl, at least they know when. Sweet Weaponry is due Jan. 25 on Toledo-based Doghouse/Heinous, onetime home to the Get Up Kids and All-American Rejects. It's now more than three years since the catchy, heartfelt This Will Undoubtedly Come Out Wrong EP helped the quartet nab a 2003 Austin Music Award for best alternative band, but the band is hardly sweating a few more months. "It took the Riddlin' Kids 21/2 years to put out their first record," laughs drummer Yogi Maxwell. What they're really itching to do is get back onstage, which happens Friday at Emo's inside with Chomsky, CD releasers Vise Versa, and the Broadcast. "We've only played two shows since June, so I'm going insane," Maxwell says. "And one was a Sweet 16 party in a parking lot."

Austin garage formalists the Ugly Beats, whose members knocked around for years in bygone local bands like Death Valley, the Sir Finks, Gal's Panic, and the Shakewells, release debut Bring on the Beats late next month on Get Hip records, the label run by veteran Pittsburgh mods the Cynics. The Beats debuted last year at the last regular Fuzz Club before DJ Sue relocated to Los Angeles; she passed their demo along to her friends in the Cynics, who liked what they heard at the Uglies' SXSW 04 showcase. "Most of us are huge Cynics fans anyway, so it's a big thrill for me to be on the same label as the band," says guitarist/singer Joe Emery. The quintet offers a preview Oct. 1 at Room 710 with Amplified Heat. 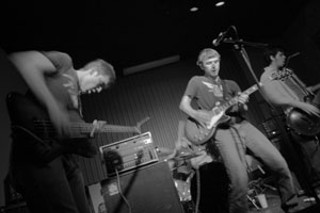 Tumultuous pop-rockers Breaking Autumn (above) took first place in Music Lab's Battle of the Bands at Redrum last Sunday, which "TCB" had the pleasure of judging with Sony Music's Jason Miller and 101X morning man Jason Dick. The no-holds-barred thrash of By Any Means Necessary ran a close second. Things are preternaturally calm Monday afternoon at Zilker Park. Four short days before tens of thousands descend on the soccer fields for the third Austin City Limits Music Festival, site crews in "ACLMF" ball-caps zip around on Gators and golf carts. Row upon row of bike racks sit at the ready, day laborers hoist the festival's colorful skyline logo atop what will become the Bank of America stage, and walkie-talkies crackle with various staffers going "off radio" for lunch. Having an extra two weeks to set up the park has "given everybody a lot more breathing room," notes producer Charlie Jones. "It means we can go home and sleep at night."

If no one seems to be losing sleep this year, there's a good reason. It's not exactly Jones and partner Charles Attal's first rodeo, and with ticket sales outpacing last year's, the festival is poised to hit a very comfortable plateau. "[It's] close to selling out," says Attal, who oversees the 130 performing acts while Jones handles production. Estimates have 75,000 people per day streaming through the Zilker gates. "I think we'll find this year is as big as it's gonna get," says Jones.

For that reason and others, 2004 promises to be a defining year for the music festival. Word has obviously gotten out, as requests for credentials have poured in from places as far-flung as Japan and Sweden. Rumors have gotten out, too, but Franz Ferdinand is not playing Stubb's tonight, and organizers are not adding a fourth day next year. A recent Associated Press article pegged the local/out-of-towner ratio at 45-to-55, figures Attal confirms. Webcasts by co-sponsor SBC at www.sbc.com will raise the potential audience even further. Though the national press has been slow to recognize it, as is often the case with events outside the New York-Nashville-L.A. line of sight, ACL is gathering Coachella- and/or Bonnaroo-type steam. Except with nicer scenery, prettier girls, and better food.

Even as ACL becomes more and more of a national, and even international, happening, the festival remains very much an Austin endeavor. With few exceptions, all the labor and services required to produce the festival, as well as the more than 1,000 volunteers and paid staffers who make it happen, hail from within the city limits. More than that, the wide range of music on display ("It's gotta be one of the most diverse lineups of all the festivals," says Attal) reflects an environment where, despite all the glib "Keep Austin Weird" sloganeering, creativity really is celebrated and nonconformity is the norm. How could visitors not catch on?

"I don't know how many times I hear, 'I caught [an Austin band] at the festival and they were great,' then they go see them in Chicago or somewhere," Attal says. "I hear that all the time."

So sweep out the hallway and get out the good china, Austin. Company's coming.

Space-rock cowboys Primordial Undermind play their last show as a local band at Beerland on Sunday with the equally confounding Iron Kite. $5 cover goes toward The Church of the Friendly Ghost.

Hurricane Ivan permitting, Austin bard Jeff Klein is about to hole up in New Orleans' French Quarter with pal Greg Dulli to record the follow-up to last year's acclaimed Everybody Loves a Winner. Look for it in early 2005.

In honor of National Talk Like a Pirate Day, which really is an actual day, the Jolly Garogers walk the plank Sunday at Headhunters. Avast!

"Nine gigs in seven days," croaked an exhausted David Beebe after the El Orbits' Hole in the Wall set last Sunday. Beebe has time to rest now, because his swamp-rocking Conrads have postponed their Hole show from this Sunday to Oct. 10.

Congrats to proud parents John and Sarah Wickham, who welcomed Elysium heir John Alexander Sept. 9. Next up in the Red River baby brigade are the Wickhams' across-the-street neighbors, Woody and Adriana Wiedeman of Room 710. Their bundle of rawk is due in January.

Austin shredders Powderburn have been added to what is easily the metal show of the year: Slayer, Mastodon, and Killswitch Engage at San Antonio's Sunset Station Dec. 3.