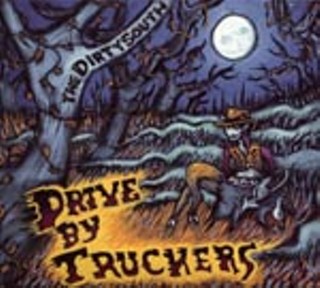 The Dirty South (New West) Southerners' love affair with their past is as much a cultural hallmark as grits and cornbread, but in the Drive-by Truckers' hands, it's in dire need of a Dr. Phil Relationship Rescue. Unlike 2003's Decoration Day, a somber account of one man's (or one band's) life going nowhere fast, The Dirty South is a sprawling, graphic voyage through the former CSA's seedy underbelly, an album that seems destined to ensure no one ever again confuses Dixieland with Disneyland, if in fact they ever did. Fourteen blood-, grease-, and tear-stained postcards from tornado-ridden places "Where the Devil Don't Stay," populated by killers, bootleggers, dope dealers, sodomites, whores, stock-car racers, corrupt lawmen, the dead, dying, and dispossessed, and folk heroes from John Henry and Elvis to Sheriff Buford Pusser (twice). Like wildflowers in a graveyard, odd patches of virtue also crop up: the stoic veteran of "The Sands of Iwo Jima," the son doggedly trying to please his father in "Daddy's Cup." The Truckers' songwriting chores are split more evenly than ever, with Patterson Hood, Mike Cooley, and Jason Isbell bringing their A game to "Putting People on the Moon," "Cottonseed," and "The Day John Henry Died," though Cooley trumps them all on the moving Sam Phillips eulogy "Carl Perkins' Cadillac." Otherwise, Hood's liner notes say it all: "Turn it up to 10 and rip off the knob." Welcome to The Dirty South. Kick off your boots and stay awhile – but watch your back. (Sunday, 5:30pm, Heineken stage)