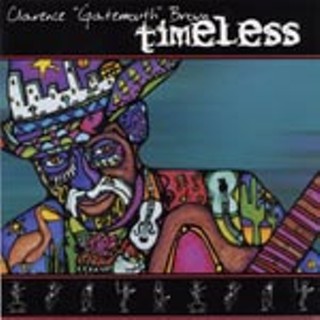 Timeless (Hightone) Timeless is an apropos description for both the classic American tunes that highlight this album and also for the artist himself, the inexhaustible singer, guitarist, and fiddler "Gatemouth" Brown. At the age of 80, he remains a national treasure who, for decades now, has been the quintessential purveyor of a conglomeration of styles now known to radio-types as Americana. Born and raised on the Texas/Louisiana border, Brown absorbed the music of the entire region and is equally at home with Texas blues, Cajun fiddling, Western swing, country music, and/or jazz. He touches on all these Timeless styles, with mixed results. Clearly, Brown's forte lies in the swinging big band and jump blues tradition of the Southwest. In his prime, while based in San Antonio, Brown was a contender to T-Bone Walker's crown as a fleet-fingered king of urbane, swinging, jazz-tinged Texas blues. Brown shines most brightly on Fletcher Henderson's "Soft Wind," Jay McShann's "Jumpin' the Blues," and Duke Ellington's "Satin Doll," instrumentals all. Brown also shows he can tackle more "modern" material with equal aplomb on Joe Zawinul's soul jazz evergreen "Mercy, Mercy, Mercy." Less successful are the country ballads, Cajun waltzes, and slow blues that fill the balance of the album. Brown's vocals on these tracks are effective, but the band is far less compelling, to say the least. Nonetheless, as a Timeless champion of American music, a musician of "Gatemouth" Brown's stature is irreplaceable. (Saturday, 7:15pm, Capital Metro stage)