Live at the Fillmore (Sanctuary) Only at the very end does Live at the Fillmore come full circle. Actually, "Circle" falls midway through Big Head Todd & the Monsters' 17-song stand at San Francisco's allmusic hall of legends. Todd Park Mohr's Les Paul fattage sets a classic, Seventies FM rock standard on opener "Dirty Juice," and immediately, the 18-year-old Colorado-based trio are "Riders on the Storm," blowing rain like the keys of their "Ellis Island." Loping set favorite "Come On" washes into a tidal pool lull until the band erupts in "Circle." At various points, TPM's worn Strat magic exerts an overpowering gravitational pull. You wish you were there. Not that the shoot is worth any more than the baseline graphics and useless DVD menu options. The multiple angle icon needs to go away, particularly when the other angle choices are equally bad. The road documentary is far better, casually revealing the natural, easy chemistry that's existed between Moore and his rhythm section, bassist Rob Squires and rock bottom Brian Nevin, since high school. The band's tour of the Fillmore connects BHTM to its musical elders. Coming across one of their posters hanging among art worthy of any MOMA, they're suitably humbled. "Be cooler if it said, '... And Muddy Waters,'" cracks Nevin. As their performance this past March peaks with the title track to 2002's Riviera, "Angela Dangerlove" and "Love Transmission" break into another lull. "Bittersweet," the "hit," sounds just plain tired. The encores lock and load, but never go off. Until the final song that is, an Eric Clapton near-hit TPM launches into with the full force of his imposing frame. His solo brands "Forever Man" like a Fillmore hand-stamp. Full circle. (Saturday, 3pm, SBC stage) 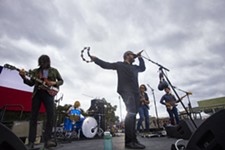