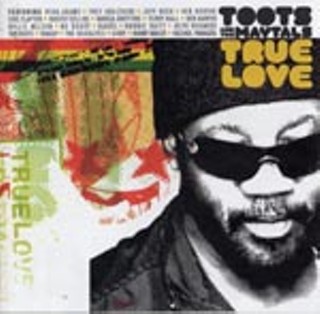 True Love (V2) Santana-ized for your protection, reggae pioneer Toots Hibbert and his band speed-date his Jamaican standards with famous fans in an attempt to break through. The result is True Love, a reintroduction to Toots & the Maytals and a lesson in reggae for beginners. The album isn't for reggae aficionados, but rather for folks who don't know the difference between Bob and Ziggy Marley. The weakest tracks ("Bam Bam" and "Sweet and Dandy") suffer because the talents of the guests (Shaggy and Trey Anastasio, respectively) overshadow the purity of Toots. Plus, it's hard to not think of them as a marketing ploy. The whole album walks a thin line between obvious choices (No Doubt on "Monkey Man") and obvious commercial gimmicks (newcomer Rachael Yamagata on "Blame on Me"). How True Love differs from the Carlos Santana school of career rebirth is that the original spirit manages to shine through. Reinventions of the dub-inflected "Time Tough" (with Ryan Adams) or Willie Nelson's "Still Is Still Moving to Me" (featuring its author) succeed because they're True Love's true duets. Bootsy Collins and the Roots would seem like a brilliant collaboration ("Toots, Roots, and Boots" as Collins raps) for "Funky Kingston." Instead, it's a game of one-upmanship. Thankfully, Toots and his Maytals are at the top of their game, even if some of their (arguably) more popular musician friends weigh them down. (Friday, 7pm, Cingular stage)