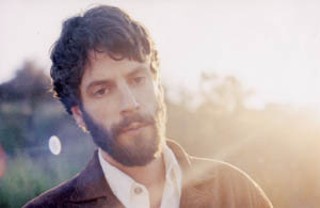 "Some people find Jesus," says the 31-year-old from Maine. "I found Stephen Stills."

His debut has been in stores less than a week, but Lamontagne's already begun developing a cult of his own: If they haven't already, somebody you trust will soon tell you to buy his Trouble. It's the kind of album music lovers tell music lovers about: 10 straightforward, magnificent songs of self-doubt and hard living.

"They're really just simple songs," says Lamontagne, who grew up off the grid, with his mother sheltering her family in parked cars, backyard tents, and converted chicken coops.

"I'm not an intellectual. It's very heart-on-your-sleeve. And a lot of it comes from a dark place -- a really self-destructive period. I hope that doesn't turn people off."

Hardly. His is the bellowing voice of two Al Greens stacked head-to-toe. It's a knock-you-on-your-ass voice, the voice of obvious sincerity. In fact, fans at a string of recent Los Angeles and New York showcases have testified online that Lamontagne cried onstage.

"I'm right in there, feeling everything, and it can get exhausting," he says. "Night after night of being on that edge of songs written during a sad, sad time gets difficult. I've talked to my manager and booking agent about spacing the shows some. I'm afraid I'll wreck."

The wreck we needn't worry about is from the Hot Lists, four-star reviews, and "next Norah Jones" buzz going to his head.

"I'm realistic," he says. "I know damn well that next year, if not next month, there's going to be somebody else everyone is psyched about. I'm going to be old news real fast. Maybe the momentum could carry over to the next record and people who like the shows and the songs will stick with me and see where it goes next. That's all I can hope for."