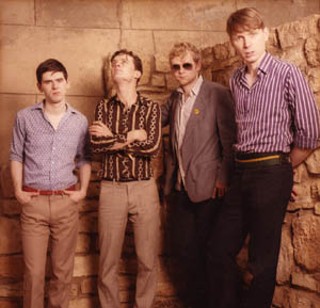 Friday 8pm, Bank of America stage
Named for the Serbian archduke whose assassination sparked World War I, Franz Ferdinand has caused a similar stir on U.S. airwaves this year. "Take Me Out," their discotheque call to arms from this year's self-titled debut, has taken the Scottish foursome from deafening underground buzz to modern-rock sensations to Top 40 cohabitants with Avril Lavigne and Ashlee Simpson.

"It isn't really affecting us a great deal," claims bassist Bob Hardy, 24, fixing himself a cup of tea in his Glasgow flat. "It's not like we go around reading the papers every day and get obsessed with it. We just kind of do what we do the way we always have done. We're all quite levelheaded people."

Famous for its shipyards, which grew fat with American tobacco, Glasgow is Scotland's largest city and one of Europe's most underrated culture capitals. Franz Ferdinand (Domino/Sony) is a natural heir to the rich Glaswegian legacy of Aztec Camera, Wet Wet Wet, the Jesus & Mary Chain, the Delgados, Soup Dragons, Primal Scream, and Teenage Fanclub.

"It's Scotland's best city," says Hardy. "It's a very, very creative place, post-industrial in a way that makes people have a bit of an edge to them and not take any crap from anyone."

According to Hardy, Glasgow is also a hell of a place to party. Soon after playing their first show in a friend's bedroom in late 2001, Hardy, singer Alex Kapranos, drummer Paul Thomson, and guitarist Nick McCarthy rented two floors of an Art Deco warehouse near the Clyde River, and began hosting art, film, and music all-nighters that promptly became local legend. "Poor sound insulation" forced them to relocate to an abandoned Victorian courthouse, where – provided they're home – they rehearse in the jail cells and put on gigs in the courtroom.

"We play six gigs a week now, so we don't really practice," says Hardy. "But we'll probably go back to the jail. I was down there yesterday. It was very nice."