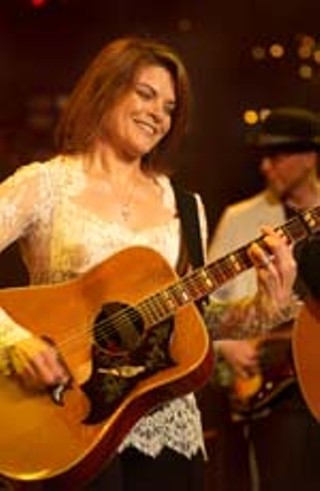 Friday 3pm, SBC stage
Rosanne Cash was scheduled to play at last year's Austin City Limits Music Festival, but her father, Johnny, passed away a week or so before, and she understandably canceled the gig. As you might expect, her appearance this year follows a period of great personal change and heartache.

"I don't know how anyone could have gotten through all this without it dismantling you," Cash relates. "I lost my dad, my stepmom, my stepsister, and an aunt in the course of a year. Nothing could have prepared me for all that. Everything got reordered."

After a couple of months' downtime, she decided to attend a Nobel Peace Prize concert in Norway at which she'd previously been booked. While there, she also attended a Johnny Cash tribute concert at an Oslo prison that affected her a great deal.

"It was amazing," she exclaims. "It was so moving. It really showed me how my dad is going to go on. There were young kids playing his songs in English, and afterward, I was devastated. But it gave me a lot of hope that he was still around. Then I went to Scotland and visited the place where the Cash name began, and I sensed him there. So I started feeling that he was out there on the road, where he had always been," she laughs.

On top of that, Rosanne says she's almost finished with writing songs for a new record.

"When my dad died a lot of songs came, and they're still coming," she reveals. "The new record started out being about loss, but it's morphed into being about how relationships go on even though one person is not in a body anymore. If a relationship is founded on love it doesn't end. I'm almost done writing it. We haven't started recording yet, but I'm hoping it'll be out in March."