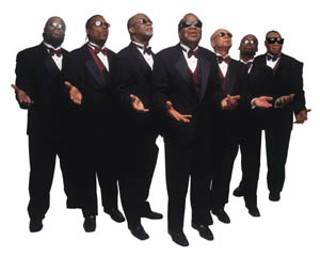 Friday 3pm, Cingular stage
How many musical groups from the Thirties are still thriving today? The way 74-year-old Blind Boys of Alabama leader Clarence Fountain perceives it, "You can either shorten your days here or lengthen them."

Along with fellow Blind Boys originals Jimmy Carter and George Scott, Fountain has let gospel music lead the way in proving his theory that "serving the Lord pays off." When asked what he would say to the recently departed Ray Charles, Fountain doesn't miss a beat.

"The thing about Ray is that he used gospel for his own purposes rather than the Lord's. He didn't really care about his body, and he was at times really nasty to people. I'm just glad that I've been able to live the flip side of that."

Looking back on the "good days" of the Fifties, Fountain recalls a time when along with the Blind Boys of Mississippi, his own group crisscrossed the country – just like today.

"Gospel was really big back then, and we didn't have to rely on the mixed crowd. It was common for us to roll into a city such as Houston or New Orleans and there would be as many as 6,000 to 7,000 people there to see us."

More recently, the Blind Boys of Alabama have recorded with everyone from Solomon Burke and George Clinton to Tom Waits, which has helped the group gain a foothold in secular circles. Their new album with Ben Harper, There Will Be a Light, is out Sept. 21, but unfortunately a scheduling conflict will keep the Blind Boys from helping Harper close out this year's ACL Festival.

"We sing with energy and power, and the only way to get that is from the Lord. A man can grow up to be 100 years old, yet if he never sees the light, he's still as lost as a ball in a windstorm."

Clarence Fountain, Ben Harper, There Will Be a Light