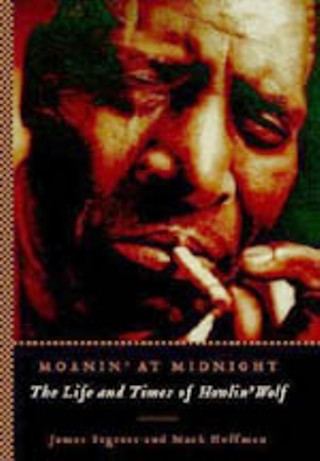 Moanin' at Midnight: The Life and Times of Howlin' Wolf

By James Segrest and Mark Hoffman

"When I was a kid, I saw a horse in a field with an erection, and I went, 'Holy shit!' That's how I feel when I hear Howlin' Wolf – and when I met him it was the same thing." Bonnie Raitt's description of blues legend Howlin' Wolf is just one of the many captivating and illustrative retellings about Chester Arthur Burnett in Moanin' at Midnight. Hands down, this new biography is the best on the seminal blues master. Sure, it's also the first book about the Wolf's place in both the blues pantheon and the story of popular American music. But even if there were an extant tome about the 250-plus pound, 6-foot-3-inch musician formerly known as Big Foot Chester, Segrest and Hoffman's book would still stand as giant as its subject's size-16 Chuck Taylors. Moanin' at Midnight took 10 years to research, and it shows. There are copious interviews, quotes from the Trail Dragger himself, and recording session notes that help paint a vivid picture of Wolf's towering influence. With Muddy Waters and a host of others, Wolf handcrafted the Mississippi-Delta-to-South-Side-Chicago blues known around the world, influencing Taj Mahal, Nirvana, the Rolling Stones, et al. The authors work in tandem, speaking from their respective proficiencies: Segrest was born and lives in the Deep South, and Hoffman plays blues guitar. There are enough footnotes to compete with any academic text, yet Moanin' at Midnight reads as smooth and complete as one of Wolf's breathy harp solos. Along with Waters, we also learn about blues greats Willie Dixon, Son House, Robert Johnson, Charlie Patton, Buddy Guy, James Cotton, and the King triumvirate, Albert, B.B., and Freddie. And the stories! Wolf being urinated on by an elderly lady in church. How "Wang Dang Doodle" is a takeoff of a lesbian anthem. Led Zeppelin settling a lawsuit for stealing Wolf's music for "The Lemon Song." Someone stabbing Wolf with a butcher's knife while he's singing. And how one time all of the instruments in Wolf's band floated down the Mississippi. It's simple: Moanin' at Midnight is a stellar biography of a musical Goliath.