Metallica goes to the movies 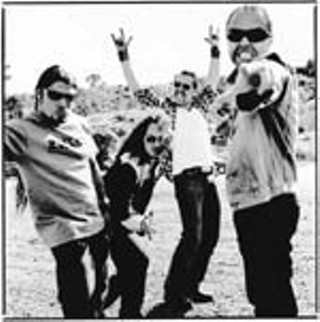 Gimme Shelter, Stop Making Sense, I Am Trying to Break Your Heart. Seminal bands make for seminal documentaries, and with Metallica: Some Kind of Monster, due in local theatres Sept. 10, Metallica joins the upper echelon of acts whose influence is matched by their celluloid slice of chaos.

Despite the fact that the Bay area-based metal institution also has an EP of the same name out, it's no stretch to view Metallica's current world tour as being as much about the film as the CD. For a band that's seen both extremes of the success spectrum in the entertainment business, this is something new altogether. In fact, after six months of speaking with film critics, Metallica guitarist Kirk Hammett is relieved to talk to the music side of periodicals.

"The music press is genuinely interested in you as a person," he says minutes before a show in Minneapolis. "The film press just wants to talk about the movie."

Following an onslaught of film promotion, Metallica can finally take a break and come back to their native terrain. It makes sense they'd want to release something as a means of keeping their music careers thriving while their big-screen career gains momentum. The new EP includes the title track (previously released on last year's St. Anger) and a collection of live tracks from a June 2003 performance in France. Featuring classics such as 1984's "Ride the Lightning" and 1986's "Leper Messiah," the Some Kind of Monster EP documents Metallica's formative years rather than the film's contemporary encapsulation of the here and now.

"Those were the songs that sounded good," explains Hammett, who had yet to join the band when the majority of these songs were written. "That was the criteria."

Though the songs are old, the EP showcases a fresh start for the group on and offstage. This is marked by a lead singer now in recovery for alcoholism as well as a permanent bassist after an agonizing history of either deceased or unhappy predecessors. All of this, and more, was fair game when cameras started rolling behind the scenes and in front of the band. Maybe it comes from decades on TV, but Metallica was shockingly candid for the filmmakers.

"I just shut them out," says Hammett about the influence of cameras on the songwriting and production process. "They kinda just blended into the background."

What the camera catches is a band in the clutches of alienation and despair. So much so, it's mind-bending that the band agreed to let the film happen in the first place.

"We had no idea it was gonna become a full-fledged film until two-thirds of the way," admits the guitarist. "By then, it was too late."

Hammett says he doesn't regret letting anything make the final cut of the film, except for the moments related to the band's financial issues. At the end of the day, he respects the filmmakers as the artists they are, kindred spirits to a degree.

"We gave them total creative control," he says. "Their editing makes the movie what it is. Cutting it would have compromised the integrity of the film."

Not only is the film an engrossing documentary, it also reveals a band that has left many fans scratching their heads in recent years. Not only did Metallica's lawsuit against its Napster-using audience create something of a backlash, St. Anger sounded nothing like any LP they'd recorded before.

"The movie helps explain some of what we were shooting for," admits Hammett in reference to St. Anger.

What happened during the making of the film helped the band come to terms with tensions and, fittingly, anger within the band. While cameras rolled, the unofficial new member of Metallica was their $40,000-a-month therapist. At times, it's difficult to figure out what was more therapeutic, the ever-present counselor or the ever-present documentarians.

"No one ever showed us how to come to conclusions," maintains Hammett, acknowledging the near breakups seen in Metallica: Some Kind of Monster. "Nowadays, I can honestly say we're a better band. If we hadn't learned what we learned, there wouldn't be a Metallica."