Another Saturday night at the bookstore, and some really awful TV

Thanks to glowing blurbs from New York Press, The Village Voice, and Time Out New York – pegging them as part of the Franz Ferdinand/Stellastarr* new New Wave wave – Austin glam merchants the Real Heroes sold out both recent NYC dates and reportedly drummed up interest at RCA and Warner. Catch 'em at the Continental Club Saturday... After two EPs, Parish packers Moonlight Towers are heading to New Orleans next month to record their first proper album with Mike Napolitano (Joseph Arthur, Twilight Singers). The full-length, which they hope to release ASAP, will feature recut EP tracks alongside six new songs... Also prepping a new LP (and seeking a label) is Interpolish local trio Single Frame, returning from the Warped Tour with two songs on MTV's Road Rules, their "Comm. Jet (Creepykid Remix)" video on MTVU, and promising news about the youth of America. "They're starting to get their fill of derivative power pop," relays bassist Brendan Reilly... Aggro-indie trio We Talked About Murder has a new album, the self-released Implosion Is Imminent, but don't look for any shows, as it was recorded after their drummer left the band. Instead, try the remaining members' new project, Beta Valentine, Saturday at the Red Eyed Fly... After remarking that "A Tiger Named Lovesick is better than the Rapture" (and how) at Sunday's Curiosa Festival in Houston, ...Trail of Dead producer Mike McCarthy let slip that Interscope has pushed back the noirish quartet's follow-up to 2002's epic Source Tags & Codes, which they recently returned from mixing in NYC, to January, thus making it the first major rock album of 2005. The band will likely tour through October and November anyway, McCarthy added. 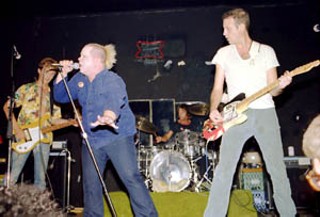 kill from the heart

Back in the sunset years of the Cosmic Cowboy era, Austin's Dicks wed punk rock snarl and garage-blues licks to flamboyant singer Gary Floyd's vividly confrontational lyrics about police raids and porno bookstores ("Saturday Night at the Bookstore"). In the process, along with the Big Boys, they wound up birthing the genre known as Texas hardcore. But that was then. Now, 20 years after Floyd left for San Francisco – where he recruited a new Dicks lineup before founding Sister Double Happiness – here comes another "Wheelchair Epidemic." Floyd has put together a new band, playing what Dicks bassist Buxf Parrott dubs "old-style Texas music," and he's invited Parrott's similarly rootsy local oufit Shootin' Pains (featuring original Dicks drummer Pat Deason) up to the Bay area for a Sept. 2 show at the Eagle's Nest, which the bassist calls a "cool gay leather biker bar." From there, a full-scale Dicks reunion was a natural. "We figured, 'Shit, we're all here, let's do it,'" says Parrot. All except for guitarist Glen Taylor, who passed in 1997 and whose boots are being filled by Brian Magee of Prettymouth and Junior Samples Jr. Parrott expects something of an Austin reunion at the Eagle's Nest, as David Yow of Scratch Acid and the Jesus Lizard has already RSVP'd to join the quartet for Lizard live favorite "Wheelchair." "We oughta tell Gary to tell the leather guys it's Texas night," muses Parrott. "They can break out their chaps." Parrott has talked Floyd into an Austin date in early October at Room 710, reason enough to start moshing, but there's also a new CD in the offing. Or sort of new: It's a recording straight from the soundboard of the Dicks' very first show, April 16, 1980, at the Armadillo World Headquarters' "Punk Prom," when they were two weeks old and didn't have a drummer. (Luckily, Deason's previous band had just moved to Philadelphia without him.) Even today, Parrott says he's surprised when youngsters tell him how much they love the Dicks. "I thought when we broke up that'd be it," he says. "But I get these kids coming up to me on the street treating me like a star. I'm like, 'Y'all are silly.'"

, whose application to UT's School of Music in the Sixties was denied, fared better at Friday's Lance Armstrong appreciation parade/party. Calling the guest of honor "The Mayor of Swingtown," Miller played all the hits and welcomed Eric Johnson for a blues tribute to Junior Wells, Freddie King, and Ray Charles. Armstrong's main squeeze Sheryl Crow also popped up, and the man of the hour himself turned in some cowbell on grand finale "The Joker." Later, Perry Ferrell, as DJ Peretz, kept the afterparty living strong at preferred Armstrong haunt the Lucky Lounge.

Possible results of the impending AMN/ACTV merger. Don't say you haven't been warned.

RED RIVER LIVE: Co-sponsored by Lone Star beer and the SIMS Foundation, "TCB," color man Chad Holt, and endless guests take viewers on a nightly romp up and down Rio Rojo that only ceases when no one is sober enough to hold the camera.

EASTSIDE DIARIES: Hourlong digest of the plentiful musical activity east of I-35. Who's around the Carousel, what's going down at the Longbranch, who's blasting the Back Room? How is the Victory Grill's remodeling going? And how soon before hipsters invade T.C.'s? Only on Eastside Diaries.

TRADING SINGERS: In the tradition of Meet Your New Mommy, local bands swap vocalists, with all the resulting awkwardness and personality conflicts caught on tape. A surefire smash.

NONE MORE SOUTH: A camera is set up in a random 78704 back yard. Soon, people come and go, drinking beer, cooking out, wearing flip-flops, smoking weed, playing songs, drinking more beer, wondering if the Horns are worth a shit this year, smoking more weed, playing more music, and asking if it's time to go to the Saxon yet.

WHAT'S MORE DISTURBING? Win cash and prizes – well, leftover AMN T-shirts and whatnot – demonstrating your grasp of pop culture's creepier side. This week: Is it Wes Borland's rejoining Limp Bizkit, Britney doing Bobby Brown's "My Prerogative" for her next LP, or the already-infamous Mary-Kate beaver shot?

Special note: None of this is actually true in even the most remote capacity.

Patricia Vonne and husband/guitarist Bobby LaRoche are back from Europe, where their dates included a stop at France's Tullins Festival. The duo's Jovita's homecoming Friday should feature songs from the album they're slated to begin in October with producer Carl Thiel.

The Alamo Drafthouse has a couple of can't-miss musical events on tap: the premiere of new corpse caper Grand Theft Parsons at the Alamo Village Friday, with live music from Freddy Steady's Wild Country and Elizabeth McQueen, and Monday's $1 Small Faces extravaganza, starring Ian McLagan himself, at the Alamo Downtown.

Sunday is the application deadline for the Austin Songwriters Group's Old #9 scholarship, good for a free workshop with Terri Hendrix and Lloyd Maines. Check www.austinsongwriter.org.