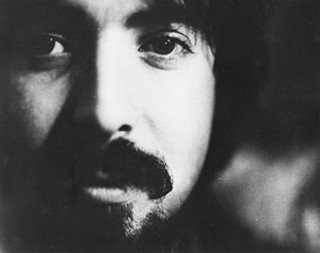 Died: 1978, from a gunshot wound sustained during a domestic dispute

Recorded: The Psychedelic Sounds of the 13th Floor Elevators, Easter Everywhere, Live, Bull of the Woods

It was Stacy Sutherland's guitar at the beginning of "You're Gonna Miss Me." The handsome guitarist-composer with dark, brooding good looks was playing with Benny Thurman and John Ike Walton in the Lingsmen when they morphed into the 13th Floor Elevators. He was also the Elevator who stuck with the band from beginning to end, and their final album, Bull of the Woods, is tribute to that. Sutherland's untimely death – he was shot during a domestic dispute with his girlfriend – ended any possibility of a full Elevators reunion early on. Clementine Hall remembers him fondly.

"Stacy was one of the most sensitive men I've ever known in my whole life. He absolutely wore his heart on his sleeve at all times, and would say the sweetest, sweetest, sweetest damn things! Just break your heart, such sweet things. Yet people would look at him and call him things like a dark angel, a biker, or a satanic figure. But God, he was the sweetest man!

"Stacy was in the Lingsmen when he met us out on the beach on Padre Island, before there were any Elevators. And he said to Tommy, 'I can't believe your old lady comes out on the beach with you and smokes dope. I'd give my arm if my girlfriend would do that. That's my dream, to have a woman by my side who would do stuff like that with me and who didn't care how she looked or if she was dressed up and get high with me.'

"But then when I'd get dressed up for a show, Stacy'd turn around and say, 'I feel like I'm traveling with a princess.' He was so dang sweet. I absolutely adored Stacy."