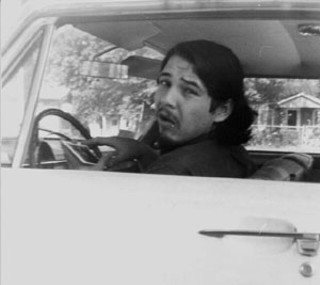 "Danny wasn't a hippie. He wasn't into peace and love. He was an addict. He was about fighting and fucking," chuckles Bob Galindo as he reflects on his brother's tenure with the 13th Floor Elevators. "He liked R&B, but the Elevators drove him nuts because Roky would never play a song the same way twice. He thought they were unprofessional, but he liked the drugs and sex and rock & roll.

"I saw Roky having his 'third eye' episode, when they played Love Street in San Antonio. He was freaking out that day, because he thought his third eye was showing. He was walking around with his hand on his forehead, very self-conscious, duckwalking behind the amplifiers. Danny was pissed off; it was bad vibes all over the place."

San Antonio native Danny Galindo replaced Ronnie Leatherman in time to record most of Easter Everywhere. Like Danny Thomas, with whom he'd jammed in local bands, stepping into an already existing band was a challenge. Bob believes Danny didn't pay much attention to the legacy of the Elevators music.

"I don't think he was surprised by [their long-term presence], but then he was cynical about everything," explains Bob. "He didn't remember the good times, only the bad times. He knew what an influence they were, but it didn't mean anything to him. He never indicated to me that he was deeply proud of what he did in the Elevators, but I think he was glad he was an Elevator.

"The Elevators were playing the Vulcan Gas Company shortly after Easter Everywhere was released. The place was packed, and there was so much excitement about the new album. I drove up from SA to hear Danny play with them. And they played so well that night. It was so exciting watching them play in that small room, watching them eight feet away on the stage. They were on. Danny was basking in the glory that night. He felt glorious."