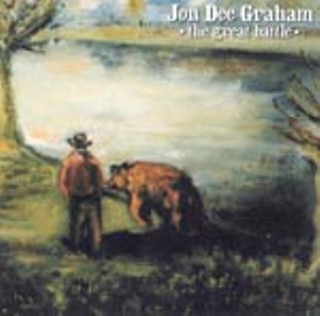 On a rebellious whim in the Seventies, my grandfather built a beach house on Galveston Island. It was a shack. The slats on the deck splintered and creaked, the furniture smelled like mildew, and the rooms were layered with smoke. I loved it. My dad would spin Bruce Springsteen on the ancient turntable, crackling the speakers and pissing off my grandfather. Bonnie Raitt sang me to sleep and cooled my blistering sunburns. When my grandfather died, the house was sold, and I was distraught. Since then, my memories have begun to fade. With the opening notes of Jon Dee Graham's fourth solo epic, The Great Battle, they all came flooding back. That gravel voice and powerful projection strike all the boss chords, and the blues riffs and pedal steel bring Bonnie on home. The Great Battle is more than familiar. A master songwriter and guitarist, Graham has created in Battle a tale of truth and hope. "Twilight" celebrates new beginnings, while the titular track – and Patty Griffin collaboration – pulls joy and optimism out of just breathing and being still. The motivation of a "Robot Moving": "Everybody says put one foot in front of the other. 'Course the irony is that's the only way feet work. What luck." Songs of change, consequence, and life; not poems, not lyrical achievements, honesty. Through blues and country and back to his roots in rock, the Skunks and True Believers, Graham has weathered the storm and become all the wiser for it. After his version of Neil Young's "Harvest," it's clear Graham is on his way to a similar clearing. Every track more impressive than the last, The Great Battle has been fought and conquered by our knight in rusty armor.