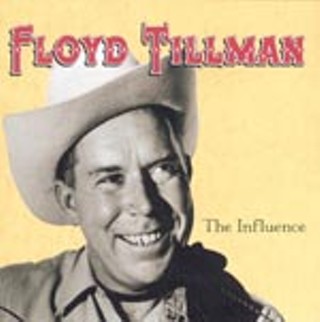 The Influence (Heart of Texas)

Floyd Tillman isn't exactly a household name. His most recent charting single came the last time an Irish Catholic from Massachusetts ran for president. Though inducted into the Country Music Hall of Fame in 1984, he spent the last half of his life in semiretirement, living near Houston and in the Hill Country, gigging sporadically and never far from home. No matter. One need only glance at the guest list on The Influence to get an idea of his impact. Dolly Parton, George Jones, Merle Haggard, Willie Nelson, Ray Price, Mel Tillis, and Hank Thompson all jumped at the chance to honor one of their earliest honky-tonk heroes. Recorded at producer Justin Trevino's San Marcos studio in 2002, Influence pairs Tillman with the aforementioned acolytes – plus Trevino, Johnny Bush, Connie Smith, and Leona Williams – on some of his better-known songs, including "Slippin' Around," "Drivin' Nails in My Coffin," and "This Cold War With You." Thanks to Johnny Gimble and Bobby Flores' slippery fiddles, Dicky Overby's liquid steel guitar, and superb vocals from Parton, Price, Haggard, Williams, Thompson, and Smith, what emerges is a moving tribute to Tillman and a fine Western swing album in its own right. Tillman died last year at age 88, but Influence is a proper epitaph for a man whose music was so powerful that Axis propagandist Tokyo Rose would regularly spin his G.I. blues "Each Night at Nine," hoping World War II soldiers would become so homesick they'd go AWOL. Top that, Toby Keith.