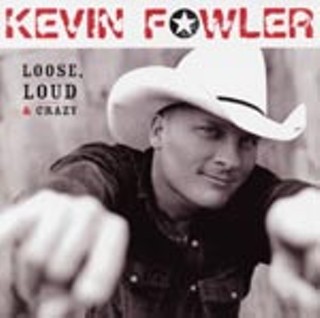 If the Lord truly loves the drinkin' man, Kevin Fowler's heavenly acreage will surpass the King Ranch, because Loose, Loud & Crazy gives Dwight Yoakam and Shane MacGowan a bottomless tab at Ginny's Little Longhorn. In 12 short songs, the Austin honky-tonker refracts imbibing through the filters of work (the title cut), amnesia ("Long Neckin' (Makes for Short Memories)"), horse racing ("Triple Crown"), theology ("Lord Loves the Drinkin' Man"), and even, in a clever twist, sobriety ("Ain't Drinkin' Anymore"). The flip side of all this elbow-bending comes on ballad "Hard Man to Love." The awe in Fowler's voice as he marvels how his good-hearted woman stands by her good-timin' man is heartfelt and very nearly palpable. Of course, 'round about "Half," she's two-stepping out the door to a Cajun beat, but such is life on the honky-tonk trail. With top-flight fiddle, steel, and piano illustrating Fowler's colorful lyrics, Loose is equally suited for nursing one of his beloved longnecks or working up a thirst on the dance floor. "Get Along" indulges in some witty Lyle Lovett-like Western swing, while "A Matter of When" makes a pensive stopover in Strait country. The only real disappointment is Mark Chesnutt duet "Political Incorrectness," which aims for the Southern satire of Ron White, but comes out toothless as an old redneck. Faring considerably better is "Don't Touch My Willie," wherein Fowler rebuffs a frisky new lady friend's advances after she heads straight for his Red Headed Stranger. And they say alcohol impairs your judgment. (Kevin Fowler headlines Yallapalooza Sunday, Aug. 8 at Carlos'N Charlie's.)