Ian McLagan walks into a bar ... 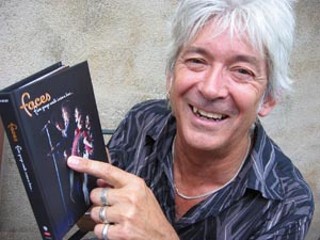 As is the case with so many immortal rock & roll acts, the Faces only lasted a few years, but one spin through Rhino's new 4-CD box set, Five Guys Walk Into a Bar ..., proves that, like the Kinks, Rolling Stones, or any number of first- and second-wave British Invasion bands, they were a band without equal. Then or now.

In 1969, former Jeff Beck Group vocalist Rod Stewart and guitarist Ron Wood joined what was left of the Small Faces, keyboardist Ian McLagan, drummer Kenney Jones, and bass player Ronnie Lane, after singer Steve Marriott left the band. The result was a wild rock & roll ride that produced four albums and tours that have become the stuff of legend.

The Faces were renowned for their flamboyance and the nearly constant party that surrounded them. At one point, they went so far as to have a bar and a bartender with them onstage. With their foppish fashion sense and brave mix of rock and soul, they became one of the most seminal bands of the Seventies.

After their breakup in 1975, Stewart transformed himself into an international playboy, Wood joined the Rolling Stones, and Jones became Keith Moon's replacement in the Who. Lane, the band's heart and soul, as well as its most prolific songwriter, actually left the group in 1973, embarking on a solo career that landed him in Austin in the mid-Eighties ["Here Comes the Nice," Music, December 8, 2000]. By then, Lane had been diagnosed with multiple sclerosis, which never stopped him from rocking the local scene before moving to Colorado in 1995. Two years later, he passed on to a higher Hall of Fame.

Over the course of 67 tracks, Five Guys sprawls enough blues, soul, funk, boogie, and country to prompt Rolling Stone Senior Editor David Fricke to write in his liner notes, "They played it as if the world was their bar stool and it was never closing time." The truly amazing thing about Five Guys is that a similar box has never appeared before now.

In fact, until the release of 1999's best-of, Good Boys ... When They're Asleep, no one had attempted to give the Faces their due. Up to that point, the band's four albums, First Step, A Nod Is as Good as a Wink ... to a Blind Horse, Long Player, and Ooh La La, had been given shoddy treatment on CD, with poor-quality graphics and less than brilliant sound. McLagan, therefore, took it upon himself to commit this labor of love, which has produced one of the all-time great box sets, quite a feat in this day and age when such collections of some bands have been done several times over.

Chatting over some Tex-Mex at a South Congress bistro, Mac is positively giddy with the results. He's a charmer with a near-white shag who moved to Austin in 1994 to escape the earthquakes, crime, and high cost of living in Los Angeles. He minces no words in explaining that since the band broke up, few in the band or larger music industry itself felt the urgency for such a set.

"Rod never talks about the Faces," he shrugs. "Well, he is now. He's loving this. But he's always been hesitant to do anything Faces, because his solo career has been more important to him. Nobody had the time to do it, so it had to be me."

At first, Mac's idea was to release every track from all four albums along with every single and B-side. Instead, digitally remastered BBC sessions, alternate takes, outtakes, hotel room tapes, along with album tracks and B-sides prompted a radically different outcome. The fact that there are 31 previously unreleased tracks makes Five Guys a remarkably fresh listen. Even lifelong fans of the band are likely to feel they're discovering the Faces all over again.

Naturally, there are the better known tunes, like the steamrolling "Stay With Me," melancholy "Ooh La La," eerie "Flying," and rollicking "Cindy Incidentally." Joining them are some surprising, previously unheard covers: John Lennon's "Jealous Guy," Free's "Stealer," the Temptations' "I Wish It Would Rain," and Paul McCartney's "Maybe I'm Amazed." There's even a live take of Stewart's "Maggie May" that might just outclass the radio staple. Plus, where one might expect this all to be sequenced chronologically, McLagan tried a different strategy, even though initially he took the traditional route.

"There were too many rehearsal tapes at the beginning; it put me to sleep," he laughs. "So I had a party. I'm a fan of deejays. Back in the Sixties and Seventies, I used to make cassettes of all my favorite blues records. Here, I sat down with a couple of pints of black madness [Guinness Stout] and said, 'Ok, "Flying" was our first single. Let's start there.'

"I made a list and listened to it and juggled as I went. I did that about three or four times. I knew it had to end with 'Stay With Me,' and I knew I had to put the worst track, 'Dishevelment Blues' before it. I really went for beginnings and endings."

The result is that Five Guys has an unparalleled ebb and flow despite some of the rougher recordings (i.e., taken from cassette) mixed in with the album tracks, the familiar laced with the previously unheard. It works because of the nature of the Faces and their ability to play almost any style effortlessly and with hearts as big as England.

"We had a lot of influences," nods McLagan, citing Muddy Waters at Newport as a jumping-off point. "We didn't have any bounds."

McLagan's introductory liner notes are especially engaging, filled with anecdotes of life with the Faces and memories of his old friend, Ronnie Lane.

"He was a rascal and charmer," says McLagan with a familiar twinkle in his eye. "He always seemed to get away with it. And though he never rated himself highly, he was simply the most melodic and subtly inventive bass player I've ever heard. A lot of people don't know who he is anymore, but he shines throughout here."

Tracks such as "Debris," "Richmond," and "Last Orders Please" are just a few of Five Guys' many Lane highlights.

"I wish I had a live 'Debris' or 'Glad and Sorry' for the box, but I didn't," says McLagan sadly. "Ronnie was the most prolific writer in the Faces, but I wasn't sure of that until I got through this. Then I knew why he left."

Around the time of 1973's Ooh La La, Lane was at his most creative, but simultaneously, Stewart had a suddenly burgeoning solo career, which interfered with the album's recording.

"After Ooh La La, Ronnie said, 'Fuck it,'" recounts McLagan. "I didn't understand it until this year, a few months ago actually. He had to leave. I don't hold it against Rod. I just wish I had been more aware of the situation. Now I say, 'Why didn't we let Ronnie sing a few songs every night?' After that, the band had to break up. Every band's like that. It's what happens after people die or people leave."

Now there's talk of a Faces reunion, though hardly anything serious. McLagan is all for it, but hesitant to get too excited about anything just yet. It's ironic to him that the same night Stewart appeared at the Verizon Wireless Amphitheater in San Antonio recently, he himself played a gig at the much smaller Casbeers in the Alamo City. All the more reason, perhaps, that he's intent on properly reissuing the four Faces LPs with bonus tracks, anything that slipped through the cracks of Five Guys.

In the meantime, McLagan's Bump Band continues to perform around Austin, including a raucous happy hour at the Lucky Lounge on Thursdays. There's also word that the Alamo Drafthouse will be hosting a one-off night of all Faces videos that have never been seen before in the U.S. some time in late August or early September. Once a Face, always a Face.

"I need the recognition!" exclaims Mac with his ever-infectious grin. "I'm the only one who's not a millionaire in that club."