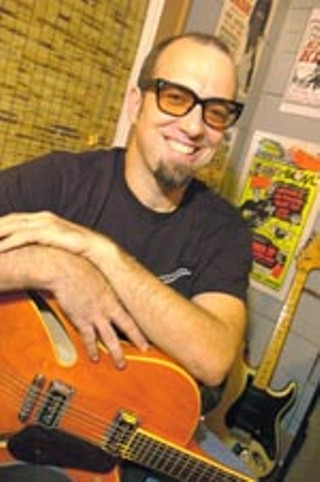 You say you've never heard of Bill Anderson? What about Poison 13, the Meat Purveyors, Hand of Glory, Horsies, Bigfoot Chester, Daniel Johnston, Neko Case, or Jon Langford? Anderson's played guitar with all of them. Still plays guitar with many of them. He's been an integral cog of the Austin music machinery for more than 20 years, so much so that he was elected to the Hall of Fame at this year's Austin Music Awards in the stellar company of Johnny Gimble, Blind Lemon Jefferson, and Ian McLagan.

"Bill Anderson is the bane of my existence and my best friend," declares Cherilyn DiMond, Anderson's bass-playing bandmate in the Meat Purveyors. "He's very responsible. He's also insanely hyperactive. He's a massive control freak, but very loyal and a wonderful friend. He's the guy that saves your ass. He saves my ass all the time.

"Like in St. Louis once, I was forced to start a skirmish with an off-duty policeman. It was totally unprovoked and not my fault. This guy was rather large and I was ready to go the distance with him, but Bill stepped in, gets in between me and this burly gentleman.

"The guy gets out of his car and with one-hand picks Bill up and sends him flying across the parking lot. Bill's holding two guitar cases, but he gets right back up and gets in between the guy and the band and talks him down saying, 'Man, you don't want to do this.' That's the kind of guy that Bill is."

Meat Purveyor fans know Anderson as the rhythm guitar player, the guy with the massive forearms and trademark thick-rimmed glasses, the butt of oh-so-many barbs and over-the-top jokes hurled by DiMond and singer Jo (formerly Walston, now) Stanli Cohen. He's been described as the band's father figure, at 45 the eldest of the group, but he also serves as its prime songwriter. All that's true, but there's a lot more to who he really is.

Born in Brooklyn, he grew up mostly in the Washington, D.C., suburb of Silver Spring, Md. After a bad year at the University of Maryland, he spent a year in California, before following a girlfriend to Austin in 1982. He got a B.A. in Radio-Television-Film at UT, but his real education came in the local nightclubs. In 1984, he took up with what he calls a straight-on punk rock band called Happy Death. Then came the now legendary Poison 13.

"Poison 13 was a loud, drunken garage band that was too bluesy for many punk rockers and too punk rock for blues fans," says Anderson matter-of-factly. "I was hanging around, being a roadie for the Big Boys, a seminal Austin punk rock band, and they needed a second guitar for their new band, so I was in."

He talks with glee of those days, reminiscing about shows at Voltaire's Basement, which was at the corner of Fourth and Lavaca.

"Some of the best shows ever were down there, with bands like Hüsker Dü and the Butthole Surfers," he chuckles. "It was tiny. The Hickoids would be playing down there with hay bales all over the place, and people would be smoking and I'd be planning my escape.

"Then there was the Beach, which is now the Crown & Anchor. One great show there was in the summer of '84. It was the Cry Babies, Poison 13, Scratch Acid, and Spot did a solo thing to open. Our singer was sick so there were all these people who took turns doing songs. I did a song, some of the Big Boys were there and they did a couple. That show was $2. It was so much fun."

After a couple of lineup shifts, Poison 13 lost its momentum and ended in 1987. By that time, Anderson had joined with former members of the LeRoi Brothers and Evan Johns & the H Bombs in the Ballad Shambles, a rootsy pop band that never really went anywhere. From the ashes of Ballad Shambles came Hand of Glory, which actually made an attempt at being successful. Hand of Glory grabbed a hold of some of the success they were looking for. They even toured Europe, twice. Anderson found it all less than satisfying.

"The things I always liked the most were blues and country," he relates. "Poison 13 was really a punk rock blues band. Rootsy music is what I've loved since I was 8 years old. The first thing that made me want to pick up a guitar was Chuck Berry. From there I went backward to Skip James, Robert Johnson, and Mississippi John Hurt.

"When I was a little kid, my dad gave me a Flatt & Scruggs record that completely fascinated me. Everybody likes a banjo played really fast. And even when I played in a band like the Horsies, I'd throw in some country licks."

His desire to return to his roots led him to Joan of Arkansas. More a social club than a real band, JoA was the template for the Meat Purveyors, who originally performed some JoA songs. Anderson met Stanli Cohen at a Bad Livers show in 1991, and she invited him to sit in with her then fledgling band.

"I wouldn't be doing music without him," swears the singer. "He took what little I have and showcased it to the best that it can be showcased. Without him, I'd being watching TV all night, every night. People that don't know him think he's like this rocker dude, which makes them think he's irresponsible. But he's able to be that rocker and still be responsible. He's a badass on his instrument, that's where he lets it all out."

It's around this time that Anderson's name as a musician achieved some status on the local scene. He was part of at least three very different bands simultaneously: Hand of Glory, Joan of Arkansas, and the Horsies. The Horsies were a twisted dance band influenced by afro-pop and Cuban music, with three female singers, a clarinet, and an accordion, that released two albums in the mid-Nineties. All this music wasn't just to pay the bills, however. Anderson has always had a day job and does to this day.

"If I was ever in a band that could do all the things I wanted to do, I could probably stay in one band, but I don't think there could be a band like that," he explains.

Later that same decade there was Bigfoot Chester, monikered for one of Howling Wolf's nicknames and specializing in gutbucket blues with a seriously raw attitude. Two discs on Sympathy for the Record Industry followed.

In 1996, the Meat Purveyors appeared. It was through DiMond's acquaintance with Jon Langford that the band was signed to Chicago's Bloodshot Records. Langford's Waco Brothers were, and remain, a major act on the "insurgent country" label's roster and the head Mekon admits that he may have slipped a tape or two onto an influential desk there. This connection expanded Anderson's horizons tremendously. He's since toured with labelmate Neko Case and has performed with Langford on more than a few occasions.

"Bill's a really great songwriter," Langford declares. "The Pine Valley Cosmonauts have recorded his songs and he's been part of their albums as well. He's a great all-around musician. As a rhythm guitar player, he's fantastic to have onstage. It allows me to sing and not be worried about having to play guitar. He's been supportive of me and it's a give and take kind of thing, ya know?"

The ability to be multifaceted is still a part of Anderson's musical life. The Meat Purveyors have just released their fourth album of punky bluegrass, Pain by Numbers, and are hard at work promoting it. He's also involved in a new project called Cat Scientist, which features lots of keyboards, and, again, a female vocalist.

"I think that compared to his other bands his musical role in our band might be a little limited because he doesn't play lead," Meat Purveyors mandolin player Pete Stiles relates. "I think that's inspired him to be more of a songwriter in order to contribute more.

"Not to say that his rhythm playing doesn't contribute, because what he does is incredibly hard. It's much harder to do than what I'm doing on the mandolin. He's the taskmaster of the band. On the road, Bill's the guy with the map and the itinerary on his lap the whole time. Every band needs a guy that's gonna crack the whip, and in this band that's definitely Bill."

The Meat Purveyors' CD release is Friday, July 30 at the Continental Club.