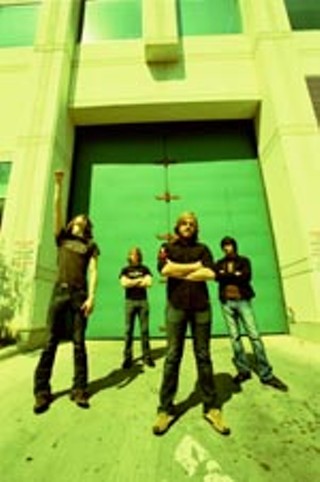 When Austin hardcore/emo quartet Recover holed up at a friend's house for eight months last year to record their debut for music-biz bigwig Gary Gersh's Strummer imprint, it was the longest they'd been in one place in four years. The result, titled This May Be the Year I Disappear and due in October, is "a little diary," says singer /guitarist Dan Keyes. The Austin sessions were actually Recover's second go-round at recording the album; Keyes says they scrapped the songs recorded in Hollywood with Linkin Park and Eve 6 producer Don Gilmore as "too wack" and "VH1 pop-rock." The upcoming disc, he says, contains a little bit of everything – "really, really hard shit to poppy, but even when we get poppy, we're making fun of pop." After years of touring with the likes of Jimmy Eat World, Taking Back Sunday, AFI, At All Cost, and Armor for Sleep, Keyes says Recover is still happiest when shows remind them of parties back home. "When we show up at a house in Jersey and pack a basement with 200 kids, that's what we wanna do." But then, that's easy for a band who've known one another half their young lives. "I've seriously seen these dudes every day of my life for the past 10 years," Keyes marvels. Recover plays Emo's tonight, Thursday, with Braid, Moneen, and Panic In Detroit.