Slaid Cleaves, anything but broke down 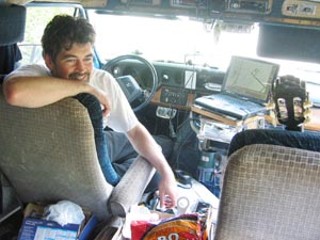 It's said that the key to success is hard work and an unshakable belief in oneself. While there are several musicians in Austin who take that advice to heart, Slaid Cleaves might be its poster boy.

Following the release of his breakthrough album, 2000's Broke Down, the now 40-year-old singer-songwriter hit the road for a solid three years, performing more than 600 shows internationally. In the process, he sold 30,000 albums and built an impressive fan base not only here in Texas, but on the East and West Coasts, where he regularly sells out clubs.

This past March, Cleaves released a follow-up, Wishbones. It doesn't offer anything radically different from Broke Down; his songs remain smart, capturing life with colorful nuance and honest emotions. But in some ways, it's a sonic departure, the guitars a bit louder, the beats packing more punch. There's a swagger on Wishbones that wasn't as overt before.

That attitude is now part of his stage show, where he's taken to performing the Who's "Won't Get Fooled Again" as a defiant political statement. That's quite a feat considering it's performed on acoustic instruments. At this point, it seems Cleaves can do just about anything he sets his mind to; all it takes is some effort and imagination.

"I'm not afraid of hard work," he says plainly. "I've always done things the best I can and not just in my music – in everything I do."

Take for example his van. On the outside, it's unremarkable, a well-worn blue and gray 1986 Dodge camper dubbed the "Blue Whale." Inside, however, it's a low-tech version of the bridge on the Starship Enterprise. Between the driver and passenger seats, there's a laptop computer attached to a GPS unit with mapping software. With a cell phone and its driver-friendly headset, radios, a new Sirius satellite receiver, and radar detector, cables run everywhere. In the back, there are captain's chairs, blinds on the windows, and even a television and VCR. Cleaves is damn proud that on the latest trip he stuffed five people, their equipment, merchandise, and a dog into the thing. And that's not even the clincher.

On the way to a gig in Wimberley, for the benefit of his passenger, he runs down the long list of work he's had done to the land-bound leviathan. At the beginning of 2004, with more than 200,000 miles on it and some heavy touring scheduled, he decided the Blue Whale needed a new engine. So, Cleaves installed it himself. This despite the fact that he'd never actually tackled such a project before. He goes into detail about dismantling the entire drive train and replacing the transmission as well. At this point it becomes abundantly clear that Cleaves will stop at nothing to get things done in all aspects of his life, not just his music.

The Whale pulls into Wimberley's Cypress Creek Cafe. Behind the venue, surrounded by a few trees and a large grassy area, is a large wooden stage, with a patch of concrete where some folding chairs are set up for the night's show. Mike Crowley, the singer's manager, and a couple of others greet us, and someone mentions Boston, where Cleaves made news last month when he appeared at Johnny D's.

Seems there was a large-screen television above the bar tuned to the basketball playoffs while he was onstage. He asked that it be turned off as a courtesy to the audience and himself. The management refused his request, so he turned it off himself. The plug was then pulled on the show, which, to the audience's delight, Cleaves continued on the sidewalk across from the club. When Dale Watson played Johnny D's a couple of weeks later, he was notified in writing before his show that the TV would stay on during his performance. Cleaves has a good chuckle over that turn of events and prepares for sound check.

Before dinner, the musician sits and reflects on Broke Down and the impact that disc's success had on the making of Wishbones. Most artists make a new album every couple of years or always have a project in the works. For Cleaves, it was a full four years between LPs.

"It's actually not that long for me," he explains. "This [layoff] was a little extra long because of the success of Broke Down. I had a lot of places to play, and I did. I did it because there was a demand.

"But the main thing was that with Broke Down, I felt I finally made the record I wanted to make for 10 years. It was the best record I could possibly do. On one hand, I wanted to tell the world about it – that's why I toured so hard – but I also had no idea what I wanted to do next. So I was really scared. I tried to cover that up by going out on the road, by not thinking about a new record, not thinking about new songs."

He's not one to write while on the road, so he took his time settling back into normal, married life, which began locally for the Portland, Maine, native in 1991, before putting digits to keyboard again. Early in 2003, he retreated to a friend's cabin in Liberty Hill.

"It'd be two or three days away from everything," Cleaves recalls, "just me and my guitar and my laptop. I write a lot on my laptop. I did that five or six times. So there were three years of touring, then six months of writing and recording, then it was six months for the record label to put it out. I knew when I finished it that it was a good, solid record.

"I'm proud of Wishbones. I love the way it sounds and I love the songs. I know it's not a huge step. It hasn't brought me a new audience the way that Broke Down did, but I have a good audience now, and it's selling much faster than the last one did."

Already, Wishbones has sold around 10,000 copies, a great start after only three months. The reason – his fan base – is in attendance at what Cleaves claims is his first ever gig in Wimberley. A good mix of young and old, looking to start the Fourth of July weekend off with a bang, are enthusiastic, vocal. They're thrilled with a Don Walser tribute that shows off the dark-haired, dark-eyed singer's yodeling ability, and the Who cover gets a rousing ovation.

The next night at the Pier in Austin is even more special. It's another outdoor show, the crowd is larger, and it arrives early to hear sets by Ginger Leigh, Jeff Plankenhorn, and the Greencards. Plus there's a degree of holiday festiveness in the air, with kids scrambling everywhere and dogs wagging their tails with approval. Cleaves is joined by his band this time, which means that drummer Rick Richards and guitarist Michael O'Connor join Plankenhorn's Dobro and Ivan Brown's bass for a sound closer to what you hear on Wishbones.

The band begins with a sing-along, Woody Guthrie's "This Land Is Your Land," and by the end, folks are kicking up sand in the volleyball court next to the stage. The whole day is a glorious slice of Americana that few want to see come to an end.

Of course for the main attraction, it doesn't. He's at the merch table afterward, greeting friends, autographing CDs, and enjoying the glow of another success. Then it's time to load up the Blue Whale and head to the next gig. There's no time to be weary it seems, because it really isn't work when you're enjoying yourself as much as Slaid Cleaves seems to be.