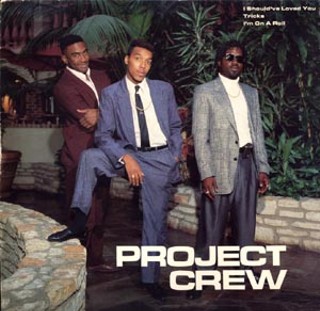 Austin's very first rap song committed to wax might have also been its most successful. Not only did "Army Man" by Project Crew become a local smash in 1988, earning regular spins on KAZI radio and at Playland Skate Center, it also resonated with soldiers stationed at nearby military outposts in Killeen and San Antonio.

Teaming the love-struck rhymes of the Rapper Clay Moe and a forlorn chorus by Lady T with minimalist production by DJ Cassanova, "Army Man" captured an emerging hip-hop scene in desperate need of leadership.

"We had this gangster-type acquaintance who offered to buy us equipment on the condition that we basically rush to release a product," recalls Cassanova. "Within three days of owning our new SP1200 we had three songs ready to go."

As "Rap Rookie" presented Clay Moe in fierce battle mode, MC Teddy Lee introduced himself on "Shop Around" by way of the line "moved to Austin from San Antone, had my Adidas warm-up and my Giorgio cologne." Having toured the modern day Texas chitlin circuit, which included small clubs in Giddings and Waco as well as a large concert hall in Houston, Project Crew invested in the self-release of yet another three-song record.

With Terry T augmenting the flows of Clay Moe and Teddy Lee, "I Should've Loved You" and "Tricks" placed Project Crew among a Texas peer group that included the Geto Boys and the Fila Fresh Crew. While Cassanova's heightened sampling techniques invigorated "I'm on a Roll" with newfound complexity, Clay Moe clamored, "Back in the afro days I used to rock it, my mic was my soul brother, pick in my back pocket."

With a year of hard work culminating in a three-month tour of Japan, Project Crew had the world at its feet before parting ways shortly after their return to Texas.

K.B., who once opened for EPMD at the Travis County Expo Center, contributed another cut called "Do It K.B.," which, in theory, approached the realm of classic material by Ice-T and Too $hort. Commanding "Dinky scratch it up so the people stop itching, Winky pump the bass 'til the people start kicking," Lady I.C. ripped a party anthem on the B-side of the record called "Lady I.C. Is Here."