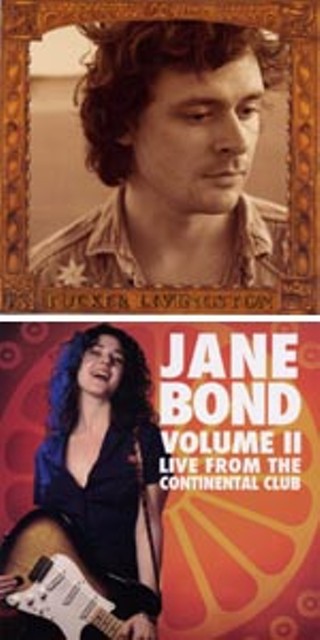 Winner of the Austin Music Foundation's first country/roots Incubator grant, Tucker Livingston's eponymous debut is a bittersweet portrait of poignant, endemic rootlessness. In 30 minutes of travelers, partings, and lovers doomed by the inexorable march of time, he examines the emotional toll of life's transitory nature. "I can hear the sand in the hourglass," he sings on "All Things," but it's hardly telling him to gather those rosebuds while he may. Against producer Mitch Watkins' lush backdrop of melancholy chamber-folk, Livingston concludes that people are inherently alone, with a memory or two of fleeting happiness often the best they can hope for. "Stranger" puts it best, leaving Livingston uneasily reconciled to his fate: "I'll always be a stranger in your arms." Though much less elliptical than Livingston, local country-blues princess Jane Bond is no easier to pin down. Vol. II's curtain rises on Bond headed to New Orleans for an impromptu wedding, quickly heading even further south: Three songs later, she vows to "ride these rails 'til I can't be found." Bond's throaty alto may have a limited range, but it suits her persona – good-time gal whose heart has been bruised one too many times – to a T. "Break Away" and "Ooh Mama" testify to how hard letting go can be, while "Chauffeur" illustrates how much fun it is to get in trouble all over again. The philanderers of "New River Train" and "8:30 Blues" are the last straw, so her revenge comes on Nancy Sinatra's sardonic "Sorry 'Bout That." "If I broke your heart last night," Bond coos, "Gee ... I'm sorry about that." She probably is, but only a little.