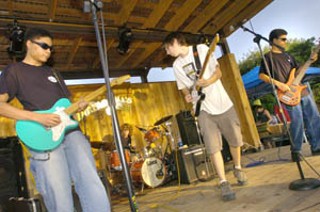 The result of Austin's prestige in the music world is something no one saw coming: The capital of Texas is breeding its own little master race of musicians. You might see it at the Natural Ear Music Camp, Austin School of Music, or Ernie Durawa's drum classes – any one of the dozen places locally that teach kids about being in bands. Nowhere was it more obvious, however, than at Threadgill's WHQ last Sunday. Six bands that had participated in the Austin Music Network's High School Battle of the Bands played in support of Hi-BoB, the nickname for the competition's resulting CD, featuring 21 songs by 21 bands. Think about that: nearly two dozen high schoolers with enough guts to get it together, meaning there must be 10 more for every one we're seeing. Fastball played as headliner, and bless the local trio's pop heart for attracting these kids in the first place. Here's Anderson High School's Euphoria, opening the show with David Sessi's compelling vocals on chestnuts like "Summertime," and Westlake HS's Johnny Fish & the Minor Dieties, who walk away with the best band name award. Misspent Youth, with members from LBJ High School and Small Middle School, are the veterans of the scene, boasting an Austin Music Award, a history that dates back to Natural Ear Music Camp, and more specifically, the remarkable Ben Porter on bass and violin. Clifford Antone stopped his conversation to compliment the rendition of Hendrix's "Star-Spangled Banner" by Cedar Park HS's Later With Justin Filer, for which the audience shamefully remained seated. Slaves at Rest from Westwood HS demonstrated VU-influenced rage-guitar and natural showmanship. Yet it was Ellipsis, with their raggedly earnest original "Try Me" and guitarist-vocalist Meredith Scott Perry, who really shone. "In six months, I wanna be a rock star," she proclaimed unabashedly. She could be. It's refreshing to see bands pouring their hearts and souls into every single note, not because it's in the contract, but because they're young and the flame of rock & roll burns and beckons.