Out of the Past

The Texas Music Museum's current home might not be the Bullock-esque architectural palace the state's musical legacy deserves, but it's steeped in history nonetheless. The museum presently shares quarters with the East Austin Economic Development Corporation and some APD administrative offices in the Marvin C. Griffin Building at 1009 E. 11th, the original site of Anderson High School. (Due south is Ebenezer Baptist Church, where Pastor Griffin has served since 1969.) The museum only has enough space to display one or two exhibits at a time, and right now its walls are adorned with "Great Tejana Singers" and "The History and Development of Conjunto Music." The exhibits trace the evolution of South Texas' native sounds from pioneers like Bruno Villareal (the first Tejano accordionist to be recorded) and Lydia Mendoza through Selena and 2000 Grammy winners Los Palominos. The 50 or so performers are spotlighted via photos, old LPs and 45s, and brief, albeit revealing, bios. Narciso Martinez, for instance, turned the polka into conjunto's predominant style; Mingo Saldivar replaced Flaco Jimenez in Los Caminantes when Jimenez joined the army; and Chelo Silva sold more records than any female singer in Texas and Mexico during the 1950s. The exhibits run through July 16, but don't expect a guided tour: The museum's all-volunteer staff works mostly after hours and weekends. Call 472-8891 for more information.

The state's never-ending search to finance its public schools without blatantly raising income or property taxes could wind up taking money from local musicians' pockets. The House's finance bill, which died last week with the rest of the special session, included a provision charging an extra $1 per head for live entertainment – professional sports, cultural performances, and live music. After the session imploded, Gov. Rick Perry appointed a committee to investigate revenue sources, and the entertainment tax is "still very much on the table," says Elyse Yates, who's starting a group called Texas Music Votes to raise awareness. One dollar a head might not sound like much, but Yates uses brother Colin Gilmore's recent Saturday-night Jovita's gig to show it adds up. With a "pretty good crowd" paying $5 each, the band netted $340, or $68 per member. Factoring in the tax – and assuming Jovita's keeps its cover at $5, which, for various clerical reasons, it probably would – that number drops to $300 and $60. If Gilmore plays 10 gigs a month, his band would be out the sizable sum of $400. "My feeling is they have their eyes on Simon & Garfunkel at $175 a head, or the Spurs and Rockets, and they're accidentally getting Colin Gilmore," says Yates. As Perry could call the legislature back into session at any time – and has to eventually – this one's a long way from over.

... And Justice for Joel

In many ways, popular doorman/stage manager "Handsome" Joel Svatek was the heart of Red River, as demonstrated by the many "IHJ" tattoos, buttons, and murals that pepper neighborhood clubs and clubgoers. Svatek, 33, died last January from injuries suffered when his car was struck from the rear by an SUV driven by Thomas Wandersee. Wandersee was charged with intoxication manslaughter and last week received a trial date for the week of July 26. At the 20-minute pretrial hearing, Wandersee's attorney elected not to challenge the results of a blood test previously conducted on his client. Besides the investigating officers, a cabdriver and passenger present at the scene are expected to testify at the trial. Joel's mother, Katherine Ward, said Monday she expected the proceedings to last about a week and that Joel's legion of Red River friends have been invaluable: "I don't know how I would have gotten through this without them." Intoxication manslaughter is a second-degree felony, with a maximum penalty of $10,000 and/or two to 20 years in prison.

Local MC Bavu Blakes has been burning up the highways between Austin, Dallas, and Houston, making good on his 2002 album's promise to Create & Hustle; he estimates he did 11 cities in 14 days in one recent jag. While on the road, he's been slowly narrowing down a pool of instrumentals for use on his next album. "Kanye West is finally not playing in my car every day," he adds. On the rare occasions he's not behind the wheel, he's mining marketing books for ideas. His latest brainstorm is a promo disc with remixes of "Play the Role." "Something told me to start giving away stuff," he says. "So far it's working like a charm." Future editions of "Play the Role" will include a video he's premiering at Ruta Maya June 11 with Money Waters, the Strange Fruit Project, Tee Double, Element, and several DJs. Blakes, who opens the "Weapons of Mic Destruction" tour at Stubb's June 6, is also partnering with Austin DJ Phyfteen and Houston Texans safety Marcus Coleman in Southwest Conference Records. Elsewhere, sometime Blakes collaborators Soul Odyssey, aka Mirage and Arson Optics, have delivered a four-song preview of their upcoming The Offering to area DJs just in time for Hot 93.3's Memorial Day Mix-Off. The duo hopes to drop the full Offering in late summer.

Introducing a periodic survey of what's tickling local musicians' ears, in their own words. Local rapper Tee Double, whose 12-inch split single "Feel the Vibe/Let It Go" was just picked up for national distribution by the Bay Area's TRC Distribution, shares his picks.

It's pure music, spiritual and thought-provoking, with a touch of the Dirty Mind era. Very cool.

It reminds me of when hip-hop was about life, and not so much cars, girls, and jewelry.

Fly or Die That cat Pharrell is on some real creative production tip. Wow!

Soul Survivors 2 Back to the early Pete Rock and C.L. Smooth times, with more focus on his beats and less on his rhyme skills. Good guest appearances. What a real compilation by a real DJ/producer sounds like – take note.

Chronic 2001 Just the clarity as far as vocals and production on this classic banger. A producer's manual.

Tee Double appears with Stimulus/Response Thursdays at the Caucus Club.

The Back Room heard an unfamiliar tune Saturday: “Wedding March.” Dusty Kohn of explosivo pop-punkers Dynamite Boy and fiancée Mindy Orsak tied the knot after DB's set, the rest of the band acting as groomsmen. Club owner Mark Olivarez threw in a hotel room for the night as a gift. Mazel tov!

Well-to-do quartet the Yuppie Pricks are looking for a mohawked punk rock type to be the cover model for their forthcoming Alternative Tentacles album, Hostile Takeover, and promise a Hot Topic gift certificate to the winner. Contact www.yuppiepricks.com.

Disco Hospital celebrates one year of treating the post-punk-impaired Sunday at Beerland, 10pm, with DJ Rachel Goldstar and early-Eighties eeriness from This Microwave World and Pack of Lies. The Gang of Four Appreciation Society meets before, during, and after.

What are the Texas Rollergirls and Rockland Eagles doing on the ABC Family Channel? Good question. They both managed to wind up in the same episode of Switched, the reality series that follows two people as they switch lives for a week. See what hilarity ensues at the viewing party, 9pm Sunday at Jackalope. 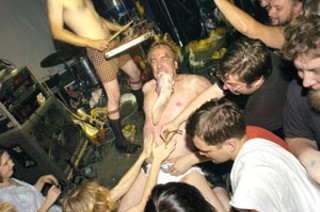 Early-Nineties Trance Syndicate overlords Crust gave a tongue lashing to a packed Room 710 Saturday night. Their rumbling, meat-tossing two-hour set suggested all manner of temptations they don't like to talk about in Sunday School.