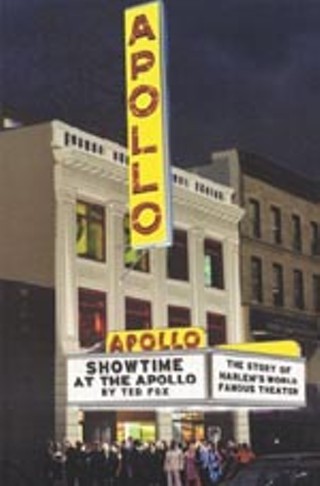 The decades have not been kind to James Brown's 1962 breakthrough, Live at the Apollo. At 31 minutes, there's not enough star time for a full head of steam, and despite its analog groove, the album grates with Brown's early bark rather than please, please, pleasing. Nevertheless, the disc, financed by the singer, heralded today's Grandfather of Soul as a supernova, simultaneously landing Harlem's Apollo Theater on the white radar for one last hurrah before closing in 1976. Showtime at the Apollo, originally published in 1983, returns fully illustrated and updated, thoroughly cataloging the birth of modern jazz, soul, funk, and R&B in America. "Black Vegas," "Uptown Met," "The Black Opry" all referred to the 1,600-seater at 125th Street between Seventh and Eighth Avenues beginning in 1934, when the Apollo hosted the Ellington and Basie orchestras, Lady Day, Ella Fitzgerald, comedians like Dewey "Pigmeat" Markham, and a hoofer named Bill "Bojangles" Robinson. The theatre's weekly open mic, Amateur Night, produced its own stars: Sarah Vaughan, Ruth Brown, Wilson Pickett, Dionne Warwick, Gladys Knight, and Baytown, Texas' Joe Tex. The 1940s brought the death of swing and birth of bop, even as the postwar rise of black harmony groups (Orioles, Ink Spots) mixed with gospel music (Soul Stirrers) and laid the foundation of rhythm and blues. Before and after Amateur Night sensation James Brown, there was Ray Charles, Aretha Franklin, Jackie Wilson, Otis Redding, not to mention John Coltrane emptying the house. Richard Pryor blew off his own steam. Author Ted Fox mows through the 20th century's mind-blowing cavalcade of segregation byproduct, inhumanity producing creative transcendence. The survivors of the era provide Fox with a front-line document, from the tragic (Little Willie John and Frankie Lymon) to the comic (Eartha Kitt). After reopening in 1978, the Apollo remains a cradle of music history, and Showtime at the Apollo reads like you just peed yourself in the front row over everyone from Ledbelly to Bob Marley and even a goofy white kid everyone had previously thought was black, Buddy Holly.