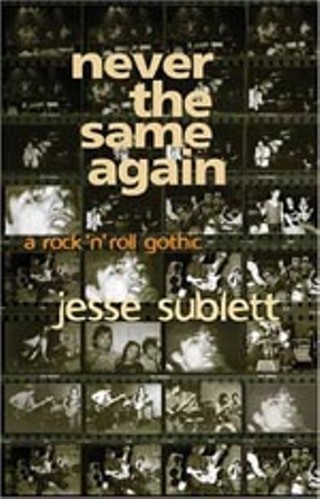 On Aug. 16, 1976, aspiring Austin rock musician Jesse Sublett came home the morning after his first big gig and found Dianne Roberts, his 22-year-old girlfriend, strangled to death in their bed. For the next 25 years, the minute details of this horrific discovery would play out in his mind over and over again. Never the Same Again is the autobiographical account of how Sublett finally manages to confront this tragedy by way of his own struggle with advanced throat cancer. Like many artists struggling with the implications of a tragic loss, Sublett spent years only able to find solace in the amplified rush of performance. As leader of the Skunks, Sublett became an instrumental figure in the burgeoning late-Seventies Austin punk scene, penning local underground favorites like "Cheap Girl." Looking back, he unflinchingly observes how the self-absorption endemic to the pursuit of rock stardom diverted the questions about his past that were too painful to answer. After the Skunks broke up, Sublett became a mystery writer, focusing on the problem-solving capacities of detective protagonist Martin Fender instead of the murders necessitating Fender's services. After his son Dashiell is born, Sublett discovers he has cancer and begins an excruciating series of radiation and chemotherapy treatments. Facing off against a form of cancer with a five-year survival rate of less than 9% gives Sublett the strength to revisit his girlfriend's murder and come to terms with his place in the random thread of events leading to her demise. Never the Same Again is a gripping memoir that never feels forced or emotionally manipulative. Whether he's describing his idyllic relationship with Roberts, going to LBJ's funeral on pills and beer, getting his '63 Fender bass stolen on the Skunks' first trip to New York City, or lying in a CT scan tube, Sublett's prose remains rich, fierce, and humbling.