Purple fingerprints on our past and present 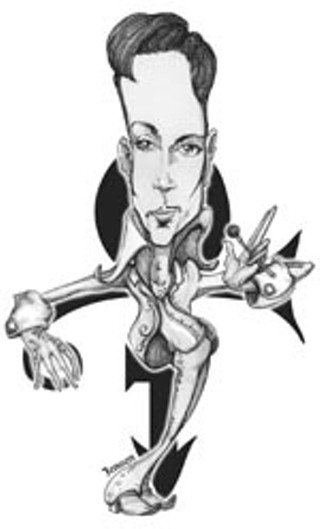 Where will you be when your youth sneaks up on you? What will trigger it? Will it be an old comic book? The resurgence of jelly shoes? Or will it be a song, a riff from a school-dance standard, something that sends you into embarrassed giggles or wistful nostalgia?

It hit me one afternoon while shopping at one of Austin's grocers, contemplating a zillion breeds of apple, wondering how in the world I'm going to finance my wedding, fretting over what to do with a seemingly useless master's degree. It was piping over the store's intercom.

More accurately, my subconscious tuned in before the rest of me did, because I realized I was already singing along under my breath before I was even aware of it.

I'm sure I wasn't alone.

As far as Prince goes, I've only ever been a dilettante, a dabbler. Sure, I climbed aboard the Purple Rain bandwagon like everybody else in the early Eighties, but I've never owned a single album, never stared for hours at a poster on my wall, daydreaming of being the mistress of Paisley Park. But that hardly means Prince doesn't occupy a soft spot in my heart. It's very nearly a requirement for someone my age.

I belong to a generation in which pop culture is the dominant vocabulary, the language most commonly spoken among those raised from the Sixties onward. We framed our adolescence in conjunction with pop culture, preening in the shower to the music video or sitcom we envisioned our lives to be.

We formed kinships through our love of Spider-Man, Kids in the Hall, Parliament Funkadelic. When we encountered someone who spoke in the same movie quotes we did or owned the entire Joy Division catalog and the Unknown Pleasures T-shirt, we reveled in the knowledge that there were others out there who were just as weird as we were.

As I grew older, more cynical, the antics began to grate. Remember Prince's "slave" stunt over a contract dispute with Sony? Unbelievable, the incredible cheek of comparing himself to actual slaves, who never got to be on TV, much less wear assless yellow pants on MTV.

But that doesn't mean we loved him any less. We are, after all, shelling out upward of $100 to catch his current Musicology tour.

Anyone who's caught an episode or two of Saturday Night Live this season may have seen The Prince Talk Show sketch, taking aim at the second-strangest person in showbiz because eccentricity is less dangerous than pedophilia. Fred Armisen plays the crown Prince of the Eighties pop triumvirate as a cowering freak, who cries shrilly, a glycerin tear oozing down his cheek, and asks rhetorical questions such as, "Can a lover be a friend?" before crawling mock-provocatively toward the camera to the tune of "When Doves Cry." All in the service of paying loving homage to an icon who's left his musical DNA strewn all over the pop music landscape.

It's been 26 years since Prince first thrust himself into the public eye with For You, and it was just a few years after his 1978 debut that we were partying like it was 1999. It wasn't the is-he-or-isn't-he sexual ambiguity that drew us to him, not at 13. It was his ability to write songs that became part of our DNA.

It wasn't just his hits, heard every 20 minutes on the radio. He also wrote the Bangles' 1986 charmer "Manic Monday," Chaka Khan's "I Feel for You," and of course Sinead O'Connor's signature tune, "Nothing Compares 2 U." Some of his lesser-known masterpieces include Ween's "L.M.L.Y.P." and Pansy Division's "Jack U Off," which, it goes without saying, appeals to a narrower demographic.

Nevertheless, for a while there, you couldn't turn the dial in any direction without hearing something with a purple fingerprint, whether you swirled from the Top 40 end of the dial to the soul station to rock and back again to Top 40. Prince was pervasive.

Twenty years later, he's still unavoidable, even when there's not a song with his name attached to it on the charts. His legacy remains stamped on today's chart-toppers: TLC, Missy Elliott, Lenny Kravitz, Beyoncé. By now, we all know OutKast are the heirs to Prince's musical sensibilities and Little-Lord-Fauntleroy-on-acid wardrobe. It's no surprise that they, along with Alicia Keys, inducted him into the Rock & Roll Hall of Fame on March 15.

Call that day the Ides of Prince, as it was there and then that he crashed the George Harrison tribute and sonically bitch-slapped everyone in the room when he set fire to the guitar solo on "While My Guitar Gently Weeps." Scoff if you want when you hear folks compare Prince's guitar prowess with Hendrix, but don't forget that guitar solo was performed by Eric Clapton on the White Album; none of the Beatles was capable of that task. Prince is.

"Musicology," the titular song from the new album, is a history lesson set to music. The bass hits on the one, a testament to Prince's funk influences beating sexily underneath his soul-man vocals. The tune is happily nostalgic when he asks, "Don't you miss the feeling music gave you back in the day?" He then name-checks Earth, Wind & Fire and Jam Master Jay before breaking down into a James Brown homage, screeching, "Ach! Get back!"

It's a joyful song, albeit one that lacks the visceral edge of Prince's past work. But listen closely to what he's doing. At age 46, he's keenly aware of his place in popular music, which is smack in the middle of a racial and stylistic continuum, having fused funk and R&B with the scorching guitar riffs and hooks of white rock and pop. He's earned his Rainbow Coalition stripes, having worked with everyone from Rick James, probably the scariest of the funketeers, to Sheena Easton, the whitest white woman in all of whitedom.

Critics say Prince is phoning it in on Musicology, that the mad professor of R&B is resting on his laurels, enjoying his emeritus status rather than continuing to push the boundaries he so strenuously tested in the Eighties and Nineties. A more accurate assessment is that this may be the closest to a return to form we'll ever get from him, although Prince is reluctant to acknowledge that he's staging a comeback.

Comeback ... feh! Prince obviously doesn't care whether we like or have even heard the new music. He's practically encouraging our ignorance by giving away a copy of Musicology to anyone with a ticket for this tour.

While inherently socialist in its intent to stick it to the Man, the freebie means that my fellow concertgoers and I are loath to purchase any of the new music since we're going to receive it for free at the show in San Antonio. No bother. He knows we're just coming to hear "Kiss" and "I Would Die 4 U," anyway.

But that's not necessarily a bad thing. In an age of cruelty and war, the temptation to relive simpler times is profound. So what if Prince hasn't charted a hit since the early Nineties? The music we grew up listening to helps us take our minds off the fact that we broke the world. Maybe all we need to do in order to feel a little more hopeful is to just go crazy like we did when we were kids.

The Hole in the Wall's Prince Tribute, part of its 30th Anniversary celebration, is Monday, June 7. Free.