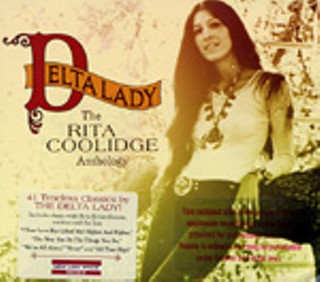 Delta Lady: The Rita Coolidge Anthology (A&M/Hip-O) For someone who "graduated from art school and walked into rock & roll," Rita Coolidge has gotten by with more than just a little luck. The lithe, willowy singer was the darling of the Joe Cocker-Leon Russell-Delaney & Bonnie nexus of the Seventies that stretched from Oklahoma to London, and she stepped into the spotlight singing "Superstar." Her 1971 debut was packed with as many stellar names of the day as could be imagined, and Coolidge's warm honey voice became a staple on Seventies and Eighties radio, with a long string of solo hits. Marriage and musical collaboration with Kris Kristofferson inspired three albums, a handful of duet hits ("A Song I'd Like to Sing," "Loving Arms"), and daughter Casey. Coolidge was more about interpretation than originality, yet like Barbra Streisand, her unique interpretations became original. She gave second-time-around platinum success to chestnuts such as "Fever," "(Your Love Has Lifted Me) Higher and Higher," and "The Way You Do the Things You Do." With Boz Scaggs' "We're All Alone," she had her first No. 1 hit. Coolidge's MOR success continued through the Eighties: another No. 1 in '83 with the theme from Octopussy, "All Time High." Though it might have been fun to hear Joe Cocker or Delaney & Bonnie cuts, the 2-CD Delta Lady covers Coolidge's career from debut to the present. And with its fine roll call of composers (Marc Benno, Glen Campbell, Dave Mason, and Leon Russell, who wrote the title track about Coolidge), Delta Lady is also a salute to female songwriters such as Carole King, Jackie DeShannon, Carole Bayer Sager, and Rita herself. In the end, it's the voice of Rita Coolidge that carries Delta Lady, and it does so with rare elegance and grace.