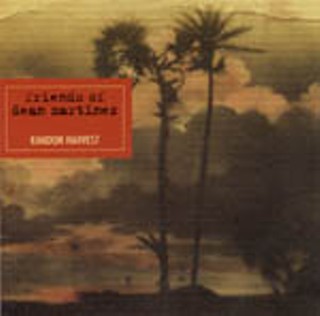 Random Harvest (Narnack) Jim Thompson wrote pulp like an oyster irritating pearls. Year after year, beginning in the Forties, the Oklahoma-born Texan secreted another volume of desolate mayhem. True Friend of Dean Martinez, Austin's Bill Elm, has been churning out similarly haunting yarns on his white-hot pedal steel since 1995's forlorn The Shadow of Your Smile. With another pal, fellow noirist/guitarist Mike Semple; bassist Brad Fordham; and a drummer or two (Dave Lachance, Andrew Gerfers), Elm's Random Harvest is another desertscape from a meaner time. Beginning on the gathering clouds of opener "So Well Remembered," with its tense, wringing, Tubular Bells riff, FODM channel crackling, freeform FM frequencies straight out of the Seventies, bits and pieces of Floyd and Zeppelin pulled out of the ether with "Ripcord" relish. Elm and company have been skulking through Japanese ghost towns like "The Winter Palace" since their Sub Pop debut, and the title track, while perhaps not as timeless as previous FODM interpretive centerpieces like "Summertime," "Wichita Lineman," and "Tennessee Waltz," touches off Harvest's suitelike fade. Borders between tracks become irrelevant in the music's undulation and elements: barbwire guitar, sunstroke toms, and circling organ. The last light of "Dusk" burns like desert clay. The razor's edge of "Lost Horizon" restates the title's theme more forcefully, before the final Sunday service of this empty backwater bids the Man With No Name good riddance in a last hail of bullets. Don't let the Friends of Dean Martinez catch you after dark.