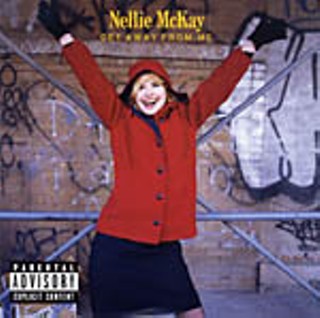 Get Away From Me (Columbia) Nellie McKay wants to be Cole Porter and Avril Lavigne – all at once. Somewhere between cute and cunning, the worlds of Tin Pan Alley pop and Midwest hip-hop collide on the British-born, Harlem-raised piano diva's major label debut. Pre-release buzz for McKay has latched onto this "novel" idea of a white-girl rapper pounding the keys. You can almost see the A&R mind at work, with a potential bonanza in this Norah Jones and Eminem world. Not surprisingly, it's sometimes hard to tell who's running the show, the major label or the major talent. McKay pulls it off for much of this 2-CD effort, with missteps that will likely evaporate after a few more years of songwriting. Her strength lies in the details of piano pop and lush arrangements, as on "Manhattan Avenue" and "I Wanna Get Married." The same can't be said for all of her lyrics: "I may listen to Enya's greatest hits, and try to control my hissy fits with pride – won't get my hair dyed" ("Sari"). Other times, as on the Stereolab-flavored "Waiter" or "Suitcase Song," McKay strikes the right balance between groove and croon. With 18 songs and plenty to roll your eyes about, there are times when Get Away From Me couldn't be a better title. With signs of true talent and ingenuity, she'll only get better as she figures out who the real Nellie McKay is.